2F west staircase (2F西階段, 2F nishi kaidan?)[1] is an area of the Spencer Mansion that is located in the west wing. This area is featured in both the original Resident Evil and its 2002 remake.

In the original Resident Evil, it is the west staircase of the mansion's second floor. It is brightened up by the lamps that hang up on the wall. Most of the walls are covered with wallpaper. The hallway leads to several rooms, including the staircase that dominates in the middle.

In the 2002 remake, the hallway has been covered with square carpets. Unlike the original version, the hallway is brightened up by candle sconces on the walls.

In Chris' scenario, three zombies will be faced here.

In Jill's scenario, two zombies will be faced.

In either scenario, the player will face two zombies. An extra zombie will arrive through the door from the West terrace when the player returns to pick up the serum for Richard Aiken – this zombie is replaced with a zombified Forest Speyer when "One Dangerous Zombie" is active.

Upon returning to this staircase from the Dormitory in either the original or remake version, two or three Hunters will burst through the downstairs windows at some point, regardless of if the zombies previously were killed or not. To enter the Taxidermy room, players must use the Helmet Key. 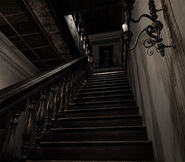 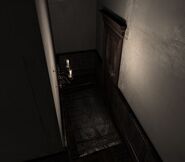 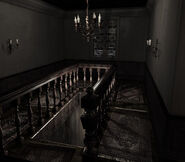 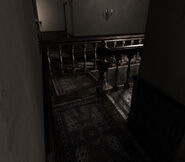 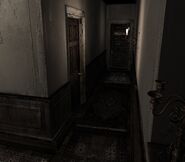 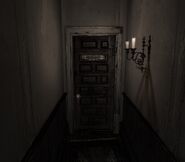 Retrieved from "https://residentevil.fandom.com/wiki/2F_west_staircase?oldid=864749"
Community content is available under CC-BY-SA unless otherwise noted.