A Day in Raccoon was a motel in Raccoon City, owned by Mickey.[1] While it was intended to be released in at least one of the 18+ scenarios of Resident Evil Outbreak, it failed to survive the cutting process that left only five ready for publishing.

The cut scenario featuring this motel would have heavily revolved around the survivors recovering old videotapes hidden around the premises in order to progress.[2] 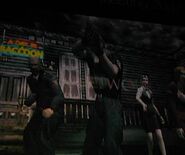 Kevin; Mark, Alyssa and Cindy in A DAY IN RACCOON Motel.

Yoko in A DAY IN RACCOON.

David being attacked in a room

Mark rescuing Kevin from a Zombie. Like most pre-release images, it features one of the generic looking "Sewer Zombies". This comes from the trailer.

A better quality version of the nearly iconic image of Cindy and Jim facing off against a zombie in one of the rooms.

This messy room is covered by an unknown substance, possibly zombie bile.

seems to be the other side of the same room. Presumably the one or the other door leads to a bathroom like the case with many of the rooms in the Apple Inn

A bathroom with a hole in the ceiling. It's unknown if this is actually A DAY IN RACCOON or the Apple Inn. Chances are its ADIR and not Apple Inn because there wasn't really any footage of the Hellfire scenario in the trailer, which this image comes from.

Kevin fighting Zombie Dogs in an alley. It's probably ADIR because in the trailer this image comes from, it's thunder storming, like the setting of said scenario.
Add a photo to this gallery

Retrieved from "https://residentevil.fandom.com/wiki/A_Day_in_Raccoon?oldid=810740"
Community content is available under CC-BY-SA unless otherwise noted.