A Welcome Surprise‏‎ is a blog post written by Adam as part of the Experience Kijuju ARG campaign for Resident Evil 5.

There was a furious pounding at my door that gave me such a start I
almost dropped my glass of whiskey. Thankfully my quick reflexes
spared me from any unfortunate loss. I wasn't sure if I should open
the door or not. I don't want to say that I feared for my life at this
point, but given the general state of craziness in Kijuju, one can never
be too careful. To be sure, I was wary of opening up the door, but my
curiosity eventually got the better of me – again.

I couldn't believe my eyes when I opened the door. It was Allyson!
She looked haggard, like she hadn't slept in a week, but I didn't care
because she's still my princess. I hurried her into the room and sat
her down and gave her a watered down whiskey to calm her nerves. I
couldn't follow what she was saying exactly because I was happy just
to have her back. To the best of my understanding she wasn't able to
find her boyfriend, and that the hotel she was staying at came under
attack by locals shouting anti-foreigner slogans. Some people were
dragged into the street and disappeared into the sea of hands of an
angry mob. What became of them is anyone's guess. Allyson was able
to sneak away and she made a bee line for my place. Since I was born
in this country she thought it'd be safer here than back at her hotel. I
couldn't fault her logic, but even I don't feel safe here anymore.

Allyson's been staying with me ever since, so I can't say the current
situation in Kijuju is all that bad. : ) Unfortunately, she gets jumpy
every time that guy with the megaphone starts up with one of his
rants. There's just no end to them. Every day more and more people
come to listen to him. No, that's not true. They come to act like a
drunken biker gang at a rock concert. 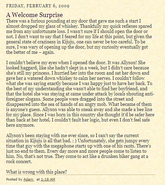 Screenshot of the Blog Post
Add a photo to this gallery

Retrieved from "https://residentevil.fandom.com/wiki/A_Welcome_Surprise?oldid=801360"
Community content is available under CC-BY-SA unless otherwise noted.