Ada Wong is a former agent of the Umbrella Corporation in Resident Evil: Retribution. Described as one of their “top agents”, she aids Alice in her journey and escape from the Russian Umbrella facility.

Ada was hired by Wesker to aid Leon Kennedy, Barry Burton and Luther West's attempt to infiltrate the underwater Umbrella facility to retrieve Alice from the Red Queen's captivity. The first to penetrate the facility, Ada successfully hacked the compound's system and cut the power to the facility, allowing Alice safe passage into a control room. During the power down, she kills several Umbrella soldiers during Alice's bid for freedom from Jill Valentine and her strike team.

When Alice reaches the control room, Ada chooses to confront the survivor with a gun to her back. Ada and Alice fight each other briefly, with Alice emerging victorious against Ada despite her skill. A knife to her neck, Ada explains that she and Wesker no longer work for Umbrella and need her help to defeat another version of the Red Queen, who's taken control of all of Umbrella.

When Wesker hacks into the facility's systems, both he and Ada explain the nature of the facility to her, revealing it was a testing bed for the t-virus and how it spread through the populace. Once the pattern was narrowed down, they would sell the virus to the highest bidder looking to overcome their political enemies.

The Red Queen regains control of the base, but Ada and Alice manage to escape the control room before Jill can apprehend them. Ada explains that they have to get through the New York simulation in order to rendezvous with Leon and the others in the Raccoon City simulation. During that time, she and Alice encounter two identical versions of the Axeman who proceed to attack them. Ada and Alice manage separate the two biohazards for a time before destroying them with a few well aimed shots to the gas tank of the taxi cab the Axeman's weapons were embedded in.

Entering the suburban Raccoon City simulation, they meet Becky, the daughter of a dead Alice Clone. Ada warns Alice against becoming attached to the child, speaking frankly on her status as a clone with hundreds of copies just like her in “cold storage”. Ada drives the point home, saying that the purpose of the clones was specifically for the study of the t-virus, and retained only “basic memories” of their counterpart and could be placed in any scenario or life utilized by Umbrella with minimal trouble.

When the three of them try to escape, they are confronted by Jill Valentine who is backed by the armed forces of Carlos Olivera, One and Rain Ocampo. Surrounded, the strike team demands their immediate surrender. Ada uses Alice's compliant surrender to the Umbrella forces to her advantage and kills one of the soldiers. Trapped in the house, Ada gives Alice a pair of glasses and her hookshot, citing they'll come in handy when the time comes. As a result of her actions, Alice and Becky escape unharmed, but she is captured by Jill.

Despite Leon's belief to otherwise, Ada is presumed dead by Alice until she is reunited with the surviving team as they try to depart from the facility. She is used as bait to lure Barry Burton out of hiding; Barry surrendered under the threat and was gunned down after successfully killing One. When the facility is flooded by the explosion caused by the bombs set up by Leon's team earlier, Ada is taken with Jill and Rain into one of the submarines to escape.

The submarine surfaces directly under Leon and the other survivors as they depart from the facility. Ada is immediately rendered unconscious by the clone of Rain and later helped to her feet by Leon as help from Wesker arrives. They arrive in Washington D.C. where Wesker explains that he leads the last pocket of humanity against the Red Queen's siege upon the humans. Ada stands alongside Leon, Jill and Alice as they survey the destruction caused by the fight against the Undead.

She and Leon also appear to share a past history together, Leon's apparent affection for her strong enough that he believes she “has a plan” for everything, implicitly trusting her to survive or escape any heated situation she lands in.

Wesker's supposed betrayal of Umbrella is revealed to simply be a ruse to draw all of the remnants of humanity into one location so he can destroy them. Ada, who was presumably unaware of Wesker's true intentions, is killed along with all but Alice and Wesker in the destruction of the White House.

In the official novelization of Resident Evil: The Final Chapter, it is revealed that Ada Wong was consumed by a creature exclusive to the novel, the Melange, that absorbed her into its mass, killing her.

Ada's appearance is apparently based on her in-game counterpart in Resident Evil 4. She wears an Asian-inspired dress that comes to her ankles. It has a high split up the right hand side, to about hip level. The whole length of the left side is covered with gold, white and burgandy embroidered butterflies and flowers. The dress has a v-neckline with black trim and has wide halterneck straps. The back is cut to a v and is fastened with lacing, like a corset. Ada wears a wide black ribbon around her neck and black high heeled shoes with X straps. The split in her dress reveals a leg holster with two straps. She also wears a red watch. Her black hair is cut in a stylish layered bob, to above her shoulders at the back and much shorter at the front.

Image of Milla (Alice) and Li (Ada) on set

Ada & Alice, about to face the Executioner Majini

Ada fires at the Axeman.

Ada informs Alice that the New York sequence has ended

Ada, as seen through Jill's eyes 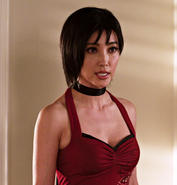 Retrieved from "https://residentevil.fandom.com/wiki/Ada_Wong_(Anderson)?oldid=870360"
Community content is available under CC-BY-SA unless otherwise noted.