President Adam Benford was Leon's recruiter into the Division of Security Operations years prior and had a close friendship with him. Adam also had some degree of military experience. He was killed in a terrorist attack orchestrated by Derek C. Simmons.

The United States for many years funded Umbrella USA's bioweapons development program and established their own in direct contradiction to the 1972 Biological Weapons Convention. When a strain of the t-Virus spread out across Raccoon City in September 1998, in what would later be known as the Raccoon City Destruction Incident, a Congressional committee influenced by Derek C. Simmons voted in favor of the Sterilization Operation, the bombing of the city. This gave the government the ability to deny any involvement whatsoever as the evidence of their sponsorship would have been destroyed.

Adam Benford, then a government agent, recruited a Raccoon City police officer, Leon S. Kennedy into the Anti-Umbrella Pursuit and Investigation Team, a counterterrorism force that would tackle the threat of bioweaponry in secret. Kennedy survived the city and rescued the G-Virus infected Sherry Birkin where an entire Delta Force unit was wiped-out in the search for "G". Kennedy only agreed to Benford's demands on the condition that Sherry would be kept in safe hands which Benford agreed to and gave her to Simmons.

Following the 2008 Presidential election, Benford entered government likely in the office of Vice President. Benford was inaugurated in January 2011 following the resignation of his predecessor midway through his term.[1] Among his first acts as President was the establishment of the Division of Security Operations and the Field Operations Support agencies[1][2][3] with the former replacing US-STATCOM's Anti-Umbrella Pursuit and Investigation Team as the federal government's chief defence against bioterrorism. Among the founding members was Kennedy.[2]

Following his win at the 2012 Presidential election, Benford began re-considering US policy on the Raccoon City incident. In confirming that the United States did indeed partly-fund Umbrella's bioweapons project and therefore held a share of the blame for the War on Terror, Benford hoped to shape a new level of trust with allied nations. This ideal was greatly opposed by Simmons, now his National Security Adviser. Simmons was involved in the American bio-weapons project and the planning of the Sterilization Operation and saw the declassifying of this information as a serious threat to the US. Despite his concerns, Simmons maintained his friendship with President Benford and planned his assassination in secret.

President Benford planned his terrorism speech to take place in June 2013 at Ivy University in Tall Oaks. In the hours leading up to the speech, DSO agent Helena Harper warned the Secret Service about the assassination plot, but the resulting search for the attackers left a hole for Simmons' team to deliver a Lepotica to the building. Due to a history of infractions, the Secret Service did not believe her pleas on the radio to return to the President.[4] Consequently, the Lepotica moved through the university without serious threat and infected the President and many others with the C-Virus. Kennedy found the President already turned into a zombie and was forced to shoot him when he tried to kill Harper.[5]

Leon crouching over a deceased Benford. 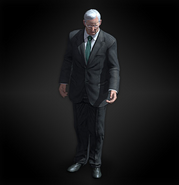 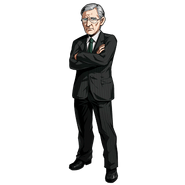