The Airport newswoman (tentative) was a reporter for PFBC news. She was killed during the Harvardville Airport incident.

Following the military quarantine of Raccoon City in 1998, this woman reported on developments from the other side of the Arklay Mountains, being unable to enter the restricted zone.[1] In 2005 this reporter and her cameraman Eddie travelled to Harvardville International Airport to interview Ron Davis, a Senator living in Harvardville. Davis had reached headlines owing to his well-known shares in the WP Corporation, which had been linked to a t-Virus outbreak in India. She did not get her answers, however, but was able to report on the sudden Zombie attack on an airport security officer.

The reporter was herself attacked by another Zombie and passed out following a bite to her neck. She survived his attack long enough to complete her mutation into a Zombie, but was killed that night by soldiers of the 75th Ranger Regiment.

Reporting on the anti-WP protests

Reporting on the bioterror incident 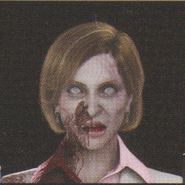