This clone of Dr. Alexander Isaacs was a virologist working for the Umbrella Corporation.

Isaacs was cloned from the real Doctor Alexander Isaacs, one of the co-founders of the Umbrella Corporation. Isaacs became a virologist for the company working with the T-virus.

Immediately following the disaster in The Hive, it was Isaacs who, at Cain's direction, experimented on Alice and Matt Addison after being pulled from the Tyrant program. But disaster struck when Cain unwisely chose to re-open the Hive, despite the containment procedures. Undead and Lickers escaped the facility, and the T-virus overran Raccoon City, with Alice and Addison, now subjects in the Nemesis program, still inside.

Following the bombing of Raccoon City, Isaacs was distraught to learn that both Alice and Addison were dead. But he was able to recover Alice's body from the wreckage of the helicopter she used to escape, and moved her and his work to an Umbrella facility in Detroit. After three weeks of experiments, Alice was revived with incredible new powers. Unfortunately, she retained her memories and escaped, being rescued by Jill Valentine, Carlos Olivera, and Lloyd Jefferson Wayne. But Isaacs had one last trick up his sleeve, and as Alice makes her escape, he activates "Project: Alice".[1]

Experimentation on the Undead

Five years after the Global T-Virus pandemic began, Isaacs commanded the Umbrella North American Research Facility and attempted to come up with a way to combat the pandemic. To this end, Isaacs worked to track down Alice and attempted to use her clones to domesticate the Undead to create a workforce for Umbrella to retake and rebuild the world with. Isaacs experiments and rebellious nature often made him clash with Umbrella Chairman Albert Wesker and Alexander Slater.

Unable to locate Alice and with her clones repeatedly failing the tests Isaacs set up for them, he created a serum using the blood of Alice's clones to attempt to domesticate the Undead without Alice. Isaacs was able to create the Super Undead, Undead that regain their intelligence, reasoning skills and memory. However, the Super Undead also gained a much greater aggression and the first subject slaughtered the two scientists helping Isaacs test him. Despite this, Isaacs made ten unauthorized trips to the surface in 24 hours and created more Super Undead, seeing them as useful despite their heightened aggression. Isaacs also continued to clash with Slater who was disgruntled at Isaacs blatant insubordination.

After Alice intervened to stop the Undead crow attack on Claire Redfield's convoy, the White Queen alerted Isaacs to the spike in psionic activity from Alice's telekinesis as Isaacs used a Super Undead against Specimen 87 on the testing floor. Using the spike of psionic activity, Isaac was able to triangulate Alice's position, repositioning the remaining Umbrella satellites and thwarting Alice's previous ability to avoid satellite detection. Isaacs was able to get a 62% match for Alice's identity and brought it to Wesker with the suggestion that he assemble a strike team and hunt Alice down. Wesker refused the suggestion and instead chose to wait until they had a 100% identification, specifically ordering Isaacs not to act until the Umbrella Committee decided what to do.

Disobeying Wesker's orders, Isaacs used a recording of the meeting between them to falsify orders from Wesker that allowed him to go after Alice immediately. Tracking Alice towards Las Vegas, Isaacs loaded a shipping container with his Super Undead and dropped it where he knew it would block the way of Claire Redfield's convoy and force them to face the Super Undead.

Having set up a command post on a nearby rooftop, Isaacs watched the Battle of Las Vegas through Alice's eyes using an Umbrella satellite feed. Isaacs was impressed with Alice's combat ability, calling her "magnificent." Once all of the Super Undead near Alice were dead, Isaacs ordered his technician to "shut her down" which resulted in Alice being frozen in place. Isaacs then ordered his men to get a sample of Alice's blood as soon as she was dead as he needed it while it was still warm.

However, before Isaacs' men could move in, Alice began to fight the conditioning despite the Umbrella technician's efforts to boost the signal. Finally, Alice fried a chip on the satellite and broke free of the Umbrella control.

Isaacs and his men eventually gained a new satellite feed and learned that Alice was headed straight for them. Isaacs desperately ordered his technician to shut Alice down again, but she was able to keep herself from falling under Umbrella control again. Realizing that he couldn't stop Alice, Isaacs fled to his helicopter as Alice killed the soldiers in the command tent. As Isaacs boarded the helicopter, he was bitten in the shoulder by a final Super Undead. The pilot killed the Super Undead and as they returned to base, Isaacs desperately called out for the anti-virus.

Upon return to the North American Research Facility, Isaacs was placed under house arrest on the order of Alexander Slater and injected himself with massive amounts of the anti-virus in a desperate attempt to combat the more powerful T-virus infection he received from the bite of the Super Undead. Noticeably sick and losing his hair in places, Isaacs was confronted by Slater who revealed that he had been ordered by Chairman Albert Wesker to kill him. Slater shot Isaacs in the heart, but this only triggered Isaacs mutation into a monstrous creature. Isaacs killed Slater with his new tentacles and went on to slaughter everyone else in the facility. The White Queen was able to lock Isaacs in the lower levels of the facility for a time, but he would eventually be able to break out.

After Alice arrived with the survivors of Claire Redfield's convoy so they could use Isaacs helicopter to reach Alaska, she entered the facility and discovered the aftermath of Isaacs rampage. Alice was informed of the events by the White Queen who told her that she could use her blood and the facility's equipment to create a cure to the T-virus but first had to eliminate Isaacs.

In the labs in lower levels of the facility, the fully-mutated Isaacs attacked Alice, flinging her into the bubble holding another Alice clone. Alice hit Isaacs in the shoulder with a kukri, forcing Isaacs to retreat, but he quickly regenerated once the kukri was removed from his shoulder. Following the apparent death of her clone, Alice encountered Isaacs again in the mock-up of the Looking Glass House. The two engaged in battle, but Isaacs superior size, strength, regenerative and telekinetic abilities gave him the upper hand.

After a failed attempt to kill Alice with his tentacles, Isaacs telekinetically blasted her through a wall and into the facility's recreation of the Hive's laser grid. Believing himself to have won, Isaacs taunted Alice that he had believed that she was the future but that he was wrong and instead he himself is the future. Having noticed the laser grid activating behind Isaacs, Alice taunted him that "no, you're just another asshole and we're both gonna die down here." Isaacs realized too late what was about to happen and was sliced into cubed pieces by the laser grid, finally killing the deranged scientist. Alice's clone, who had revived in time to use the laser grid to kill Isaacs, deactivated the laser grid in time to save Alice's life. Watching Isaacs' body fall to pieces, Alice's clone taunted him "yeah, you're the future alright."

In The Final Chapter, Alice is shocked when she encounters what appears to be Isaacs in an Umbrella tank years after his death. Alice quickly realizes that this Isaacs was simply a clone and believes that the one she has encountered is the real Alexander Isaacs. Later, when Alice tells Claire Redfield that Isaacs is coming after them, she is shocked as she too believed Isaacs killed by Alice. Alice explains to Claire how the Isaacs she killed was just a clone.

Dr. Isaacs was a man of cool temperament, being knowledgeable and rational. After the Global T-Virus pandemic, he worked for the good of mankind under Umbrella chairman Albert Wesker, trying to locate Alice and take a sample of her blood, thus creating a more effective cure to the T-virus. His methods were unorthodox, however, and he regarded his work with a higher priority than the lives of his colleagues or a few civilians. In fact, one might go as far as to call Isaacs selfish, cowardly, and cruel.

This is evidenced by the fact that after the initial test of his serum designed to domesticate Undead failed, and the Undead went berserk, killing a scientist. Dr. Isaacs quickly slipped out of the room, locking the doors and sealing a second scientist inside. That scientist could have easily escaped, had Isaacs quickly let him slip out while the enraged Undead was preoccupied feasting on the first.

However, Isaacs coldly watched as the man was ripped apart and eaten alive by the Undead, coolly running his fingers through his hair and adjusting his tie. His instincts for self-preservation also showed itself during the ambush in Las Vegas, when Alice attacked the Umbrella tent. Isaacs quickly fled to the nearby helicopter, leaving his colleagues to die. Isaacs maintained a wary relationship with Alexander Slater, who did not much like the scientist.[2]

After his mutation into a Tyrant, Isaacs gained powerful abilities. Notably, his wounds regenerated within seconds, only remaining open if an object was inside of them and then healing once the object was removed. This rendered Isaacs nearly invulnerable with even being blasted through a wall just stunning Isaacs for a few moments. The only known way to kill Isaacs as a result was complete destruction of his body. He also had superhuman strength and a trio of deadly tentacles with pointed ends Isaacs could use as powerful weapons. With just a roar, Isaacs was able to unleash a powerful telekinetic shockwave, which unlike Alice, caused him no pain and/or weakness.

Alexander Isaacs was a tall, middle-aged Caucasian man of British background. He had sea-green eyes, and dark blonde hair. Isaacs was usually seen wearing a white lab coat, but changed into more casual clothes when he went to Las Vegas to ambush Alice.

Alexander watches as the scientists die at the hands of the Super Undead.

Isaacs seconds after being bitten. 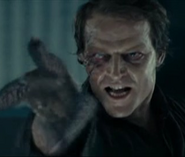 The early stages of Isaacs' infection.

Isaacs being destroyed by lasers.
Add a photo to this gallery

Retrieved from "https://residentevil.fandom.com/wiki/Alexander_Isaacs_(clone)?oldid=762622"
Community content is available under CC-BY-SA unless otherwise noted.