Start a Wiki
watch 01:50
The Loop (Games)
Do you like this video?
()
For the King's Foundation equivalent, see Crocodice.

Alligators have been known to be infected with the t-Virus, and a number of individual cases exist.

A number of alligators were infected during the Raccoon City Destruction Incident.

An alligator lived in the sewers underneath Raccoon City. This very large mutant grew from a baby which, like the urban legends, was flushed down the toilets, fulfilling the "sewer gator" myth. This alligator became a threat to a band of survivors moving through the sewers in search of a way to the Raccoon City Underground Laboratory. It was killed when it bit into a fuel canister, and a well-targeted shot caused it to explode inside its mouth.

Another alligator residing in the Lakeside Area of the Raccoon Zoo was one of the main attractions until the virus outbreak occurred. The survivors who crossed the small lake had to deal with the monster while swimming across.

Yet another alligator lived in the sewers of Sheena Island. Considering that the island was near Europe, this animal was probably transported as a pet like the one in Raccoon's sewers.

The alligators infected with the t-Virus experienced increased size, strength and aggression. The gator that Leon, Ada and Claire encountered grew to an enormous size, filling almost the entire sewer. The gator in the zoo grew only a bit larger, but still proved to be a formidable foe.

Both animals will attack any uninfected creature that comes near them. The sewer alligator did not show any hesitation to chase its victims on dry land, unusual since normal crocodilians often do not go very far from sources of water. The zoo crocodile on the other hand did not leave its lake home, but instead attempted to bite any victims near the lake shores or in the water.

The Alligator can be defeated in Scenario A by simply shooting it (though the monster is really tough), causing it to eventually smash a hole in the wall and escape. A small amount of ammo will appear a little later on. If the Alligator is defeated this way in Scenario A, it will come back again in Scenario B. In this Scenario, shooting the monster until it collapses will finally kill the creature for good.

The other more economical method involves releasing an emergency gas canister which the Alligator promptly picks up in its mouth. When the canister is shot, it explodes, taking much of the Alligator's head with it. Defeating it this way means it can be killed with only one handgun round. Also if the monster is killed this way in Scenario A, it will no longer come back in Scenario B.

In Outbreak File #2, the only strategy is to just swim over the area where it lives. If you really need to shoot it, stay on the dry land but close to the water. Alligator eventually will swim to the edge and try to attack you on land. When it tries, just shoot it. It will take quite a few shells from the shotgun to take it down, but using the Hunting Rifle will kill it in two shots.

The Alligator in RE2

The Alligator approaching in RE2

The Alligator in Outbreak File #2

The Alligator in Survivor 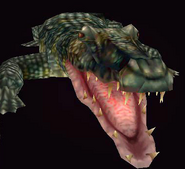 Retrieved from "https://residentevil.fandom.com/wiki/Alligator?oldid=404844"
Community content is available under CC-BY-SA unless otherwise noted.