Amelia was a civilian living in Raccoon City at the time of the t-Virus outbreak of 1998. She is a caucasian women, appearing in her 40s, with shoulder-length brunette hair, wearing eyeglasses and a black, business-style embroidered blazer and skirt.

During the earliest part of the Raccoon City Destruction Incident, whilst the emergency services were still somewhat functional, Amelia was a citizen rescued from the Apple Inn by the RFD, and is seen sitting on the pavement being consoled by a firefighter following the RFD's rescue of the survivors.

Following the complete collapse of emergency services, Amelia attempted to escape Raccoon City during the chaos, and sought refuge within the South Raccoon Street station, likely assuming the subway as a possible means of evacuation. During the "Underbelly" scenario, finding no means of escape, she attempts hiding in the Women's staff restroom where the survivors arrive in time only to witness her being forcefully carried into the vent shaft system by an unseen attacker. Her screams can be heard soon after, followed by blood leaking to the floor from the vent. It is likely she was taken by a Mega Bite. At some point later, she mutates into a zombie and begins to attack other surviving citizens.

Amelia's character skin can only be accessed through cheat devices, such as GameShark. She's a Yoko-type character and starts with a Red Herb in her inventory.

Amelia has the following stats;

During Underbelly, the Player must witness her death in order to obtain Event Checklist points. 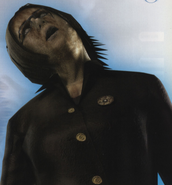 Raccoon's Destruction 2
Add a photo to this gallery
Retrieved from "https://residentevil.fandom.com/wiki/Amelia?oldid=803925"
Community content is available under CC-BY-SA unless otherwise noted.