Andy was an officer of the Raccoon Police Department. He is a caucasian man with short, brunette hair and a clean-shaven face, appearing in his late 30s or early 40s.

Horribly wounded during the Raccoon City Destruction Incident, Andy was covered in severe bite wounds: two on his right arm, one on his left, and a deep bite mark on his left clavical close to his throat.[1] He is seen being tended to by a nurse in the rear of a van following the completion of "Operation: Mop-Up" on September 24 as the RPD attempts to regain control of the city.

Although Andy's eventual fate is unknown, and the circumstances regarding his injuries are never made clear, due to his critical physical trauma and rapid infection rate, it would seem almost certain that he did not escape Raccoon City alive.

Andy is unlocked in a playable character set along with Jean, Tony, and Fred by beating "desperate times" on any difficulty with any character. He is a Jim-type character and appears heavily injured, starting the game already in DANGER mode. Tying into the 'theme' of him being close to succumbing, he has a high infection rate - 1.84% per minute, giving the player 70 minutes. His running speed is at 89% of the maximum, with an attack strength measured at 0.83 (with "1" being the default average). Playing as Andy also gives the player an Iron Bar as a starting item. 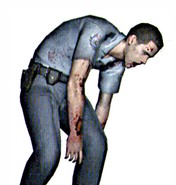 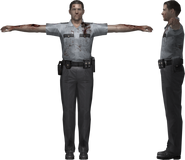