Angela Miller is an American police officer who serviced with Harvardville Police Department's Special Response Team during the 2004 Harvardville bioterror incident. She was the sister of Dr. Curtis Miller, who was heavily involved in the attacks.

Little is known of Miller's early life other than she was close with her older brother, who lost his own family during the 1998 Raccoon City Destruction Incident. Following this incident, the two lived in Harvardville where Miller got a job at the Harvardville Police Department and her brother became a doctor for WP Corporation. Following an incident where Miller plunged into a river to save a child, but got in trouble herself, Miller was compelled to be a better officer and was able to get into their elite Special Response Team (SRT).[2]

Miller's relationship with her brother became strained around 2005, when he became highly suspicious of the WP Corporation's newly built research complex outside the city, fearing the company was too similar to the defunct Umbrella Corporation. His increasingly aggressive demands for information disclosure resulted in him losing his job, being arrested for trespass and the NGO TerraSave being forced to distance itself from him.[2] He finally disappeared from the city with no explanation for where he was headed, leaving Miller to look after his house.[3]

In July, TerraSave released a report accusing the WP Corporation of an unethical clinical trial in India which resulted in patients displaying symptoms of Cannibal Disease. From this, Miller herself became increasingly obsessed with the company, and used her police time to instead investigate its activities. Over the next few months, she determined they were negligent in India for the sake of fast-pacing a retroviral drug through human testing on behalf of a top-secret deal with the Pentagon.[3] Attempts to get more information from other people left her exposed and treated with suspicion, with the WP Corporation filing a harassment complaint following a meeting in Washington, D.C. and a former TerraSave Secretary General accusing her of being a corporate spy.[3] Her investigation stalled from there, but was renewed in October when the Secretary General informed her of her brother visiting the Savoy Hotel in Chicago; Miller arrived too late to meet him, but did find he used a false name and address to stay there.[3]

In early November, TerraSave made plans to stage a protest in Harvardville ahead of the National Pharmaceuticals Conference, and to take place at Harvardville Airport where they and reporters for three major networks planned to stop Senator Ron Davis for an interview. Plans were underway for increase police presence in the area for the next week ahead of the event, and during this time Miller was warned through Davis not to get involved as he had himself become aware of the harassment complaint as a major shareholder.[3]

On the day of the event, it soon transpired a terrorist operation was underway, with a number of people displaying symptoms of Cannibal Disease in the airport beginning to violently attack others, including a reporter. An aeroplane was also downed during the incident, caused by a separate outbreak spread by an infected passenger. Soon a major incident was declared, and HPD placed the area on lockdown, reinforced by an Army Ranger detachment once a strain of t-Virus was identified to be the cause. Having received a 911 call from survivors trapped in a VIP room, SRT made plans to infiltrate the airport and rescue the survivors before the planned Ranger operation which would kill everyone else still inside. Miller and her partner Greg Glenn were placed under the command of Leon S. Kennedy, a USSTRATCOM agent personally sent to lead the raid due to his experiences with biohazards.[2]

The three made their way into the airport via a helicopter and made their way through in search of the VIP room. During their search, Miller discovered an injured survivor, but discovered too late the man was a Zombie, and he was shot dad before he could attack her. Eventually the team was successful in reaching the room, where they found Senator Davis, an airport worker, TerraSave member Claire Redfield and eight-year old Rani Chawla. The group made their way through to the terminal to the front entrance, though Glenn was infected and had to be left behind in the process. After their escape, Miller was informed that the WP Corporation's classified project was indeed a t-Virus vaccine, and was angry at the company for not vaccinating the team before they entered the airport.[2]

Following the unexpected sabotage of tankers containing the vaccine, Miller and Kennedy investigated Redfield's claim her brother was at the airport, which led to her reluctant suspicions he was involved in the attacks. Taking Kennedy up to his house, she found it burning to the ground, having been set on fire by her brother earlier in the day.[2] When a phone call with Redfield went dead while she was meeting the WP Corporation researcher Dr. Frederic Downing at the company lab, Miller and Kennedy rushed out there hoping to take Curtis into custody before anything bad could happen. When they arrived, he had already set-off a bomb which spread t-Virus around the lab and infected several researchers, and he had infected himself with G-Virus. A Ranger squad arrived in the building to fight him, but was soon wiped-out by the evolving G mutant. During the battle, Miller was forced to drop him down a chasm where his body was incinerated.[2]

In the aftermath of the attack, it was discovered that Curtis had in fact been radicalised on behalf of Downing, who faked his death in the attack in order to hand over t-Virus samples to soldiers from a rogue state. Her brother had, therefore, served only as a convenient means of passing the blame. The three drove out of the city and arrested Downing before he could escape.[2] 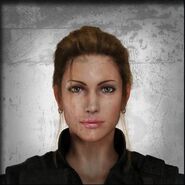 Leon, Angela, and Greg before their mission. 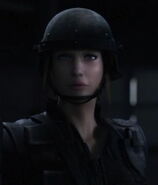 Leon and Angela running from a mutated Curtis Miller. 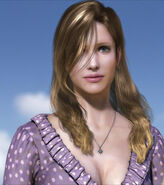 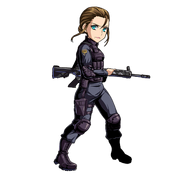