View source
watch 02:59
Wiki Targeted (Games)
Do you like this video?
Play Sound

The Anti-Materiel Rifle is a weapon that can be found in Resident Evil: Operation Raccoon City. A generic name based on the weapon's classification - an "anti-matériel rifle" - it is a high-caliber weapon designed to damage equipment such as light vehicles or even tanks. These weapons fire extremely powerful ammunition, such as the infamous .50 Caliber round.

The Anti-Materiel Rifle is featured in Resident Evil: Operation Raccoon City as part of the Power Weapons Pack for those who pre-ordered the game from Gamestop[1] or purchase the special edition of the game. The Anti-Materiel Rifle is incredibly powerful, and can kill in two well placed shots in multiplayer. It's capable of killing with just a single headshot towards enemy players as well but the Bolt Action fire rate makes it a lot harder to put in that second shot in certain situations. It also has a 5-round magazine and 25 reserve rounds.

It is the only bolt-action rifle in the game that uses a magazine rather than having to reload individual rounds. According to the trailer for the ORC Power Weapon Pack, the rifle fires .50 BMG rounds.

Picture and Description of the Anti-Matériel Rifle, taken from the DLC trailer. 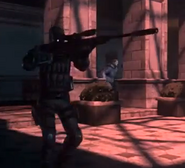 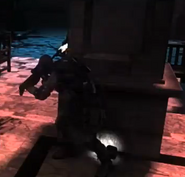