Ark Thompson (アーク・トンプソン, Āku Tompuson?) was an American private detective whose investigation of Umbrella Pharmaceuticals led to the bioweapons incident on Sheena Island.

Thompson infiltrated Sheena Island sometime in October 1998, at the request of USSTRATCOM agent Leon S. Kennedy, a personal friend of his. It was suspected that Umbrella was performing illegal bioweapons research on the island, and discovering the nature of that research was important. Thompson's investigation took place during a deterioration of order on the island, with a secret investigation of Commander Vincent Goldman for criminal conduct being undertaken by loyalists to Umbrella HQ. When Thompson was seen impersonating Commander Goldman by a young child, Lott Klein, the commander was informed[1] and came to the incorrect conclusion that Thompson had been sent by HQ to obtain proof of his crimes and had the Tyrant Plant's bioweapons released into the town to eradicate its population as punishment. During the outbreak, Thompson infiltrated Umbrella's administrative building and began destroying sensitive documents relating to B.O.W. research to prevent their seizure.[2][excerpt 1] He was caught in the act by Commander Goldman, who chased him to the helipad. Though Thompson was able to commandeer his helicopter, Goldman pursued him by grabbing hold of the landing skids.[3] The helicopter soon after lost control and crashed into the town; Goldman himself was incapacitated after falling several stories, while Thompson was rendered amnesiac.[4]

Armed with a handgun, he travels back into the island's city, trying to explain what happened to him, finding an unconscious Vincent in a street, clutching the dog tags. This leads him to assume that the man on the ground is Ark.[5] He finds the city overrun with zombies, using his gun to defend himself, but he presses on to discover the truth.

A phone call from Andy,[6] coupled with photographs at Andy's workplace,[7] convinced Ark that he is really Vincent and thereby responsible for the horrible acts performed on the island. He also finds fellow survivors, Lott and Lily Klein, who both know the truth of his identity but refuse to trust him due to his fear to be "punished" by him for telling Vincent that he was a spy.[8] He protects both children from the island's zombies, Tyrants and other creatures at numerous points, finally convincing Lott to confide to Ark about his identity. Ark's memories surge back, and he recalls his mission to put the Umbrella facility out of commission.[3]

Ark and the Klein children locate an emergency helicopter in the facility, but a prototype for a new kind of Tyrant, named the Hypnos-T Type, stands between them.[9] He manages to hold the beast off before joining the children in the helicopter, with the Hypnos-T Type in hot pursuit. Flying above the island, they discover the Tyrant managed to grasp onto the helicopter, attempting to kill the three inside. Ark then uses the chopper's missile launchers to finally obliterate the Tyrant, and he, Lott and Lily fly back towards the mainland.[10]

In the game, Vincent Goldman grabs Ark's dog tags, but it is left unexplained why he would have dog tags, since he's a detective, although it is possible he is a former military man and simply kept his dog tags as a memento from his service. This, along with the fact that Ark was able to successfully pilot an assault helicopter at the end of the game, suggests that he may have been attached to an Army aviation unit in his military career prior to 1998. 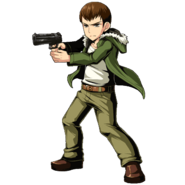