The Arklay Mountains (アークレイ山地?) is a Midwestern American mountain range situated mostly or entirely within Arklay County. The Arklay Mountains are themselves part of the wider Raccoon Forest region, and until the 1998 viral outbreak was a major tourist attraction for the state.

Located on the outskirts of Raccoon City, the Arklay Mountains faced heavy traffic from the notorious Umbrella Corporation, who maintained several large facilities in the region, including the Arklay Laboratory, NEST, and the Umbrella Executive Training School.

The Arklay Mountains are situated northwest of Raccoon City and are a popular hiking and camping destination frequented regularly by Raccoon's nature-loving populace as well as the tourists to the area. Most of the Arklay region is unused and is almost completely covered with heavy vegetation.

The Arklay Mountains are classified as temperate hardwood forest, with the region being dominated by Pine trees, Maple trees, Oak trees and other native plant life such as Raccoon City's signature colored herbs. The herbs were first discovered in the Arklay region and are often used for medicinal purposes both locally and abroad. The Arklay Mountains are well known throughout the medical community, with the Green, Blue and Red herbs having revolutionized the healthcare industry and garnered massive profits for pharmaceutical companies (including, but not limited to, the Umbrella Corporation). Each herb has its own unique medicinal value and have no known side effects associated with their use. They can be mixed together and converted into capsule or powder form to achieve different curative effects. The herbs can be found in many areas of Raccoon City, including several of the city's key public buildings, such as Raccoon Police Station. The citizens of Raccoon City have also been known to keep the herbs in their houses and places of employment for decoration or use.

The Baker family from Dulvey, Louisiana appeared to have visited the area at some point due to a picture in their house titled "Arklay Mountains, July 7, 1991".

After the t-Virus outbreak caused by Queen Leech, the mountains and surrounding forest became considerably more dangerous for travel. Certain Umbrella experiments escaped some of the facilities located in the mountains, killing various people throughout the mountains and prompting R.P.D. to deploy S.T.A.R.S.

In addition, before these events, Hikers were known to disappear into the mountains only to never be seen again. Either due to being lost in the thick fog that often envelopes the forest or being lured to their deaths at the hands of one Al Lester.

A portrait of the Arklay Mountains, found at the Baker Ranch.

Concept Art for the Raccoon Forest. 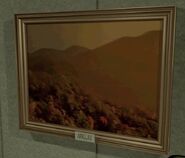 Picture of Arklay Mountains in the Raccoon Hospital