The armor room (甲冑の間, Katchū no ma?)[1] is an area of the Spencer Mansion located at the U-shaped corridor that is featured in both of the original Resident Evil and its remake.

It is a large room that is illuminated by lights on the ceiling, with two open holes and a button in the middle. There are several suits of armor lining the walls bearing an assortment of weapons. A small showcase is placed at the back of the room.

In the 2002 remake, the room was redesigned. Instead, it features only four knights, each one wielding a unique weapon: An ax, a shield, a sword and what the guide refers to as a "spear" (actually a halberd). At the back of the room, four framed pictures of knights are placed on the wall with a small depression below it. In the center lies a square pedestal bearing the button and the words "Woe to those who disturb my sleep".

In either Chris or Jill's scenario, the player can find the Sun crest inside the showcase at the back of the room. There is a switch which will release poison gas from the open holes. Player must push the two statues to covered the open holes, thus preventing the gas from escaping. As the player presses the button one more, the showcase will open, enabling the Crest to be obtained. On Arrange mode, the Emblem will be in the showcase.

In either Chris or Jill's scenario, the player can see a mysterious box inside the small depression. However, a grate prevents them from obtaining it. To unlock the grate, player must push the knight suit statues back to its place according to the right pattern:

The knight statues must be placed accordingly to the right pattern, otherwise it will automatically move back to its original place.

Once all is done, the button in the middle can be pressed and the depression will open, thus allowing player to take the Mysterious box. 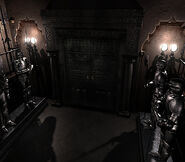 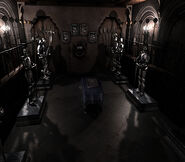 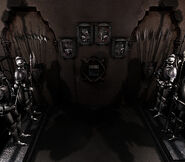 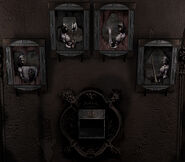 Retrieved from "https://residentevil.fandom.com/wiki/Armor_room?oldid=659480"
Community content is available under CC-BY-SA unless otherwise noted.