Leon and Ashley in Resident Evil 4

Ashley Graham sitting on a barrel

Ashley in her second outfit

Ashley in her knight costume

Ashley crawling under a tunnel 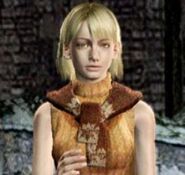 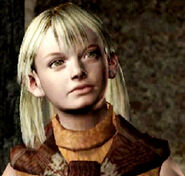 Ashley in the machine

Ashley being saved from the machine by Leon

Leon wondering what the machine was doing to Ashley

Ashley is trying to snap out of the effects of the machine.

Ashley is still feeling the effects

Leon and Ashley running away.

Ashley in Minna to BIOHAZARD Clan Master.
Add a photo to this gallery
Retrieved from "https://residentevil.fandom.com/wiki/Ashley_Graham/gallery?oldid=756546"
Community content is available under CC-BY-SA unless otherwise noted.