Resident Evil: Operation Raccoon City
The Assault Rifle is a weapon that appears in Resident Evil: Operation Raccoon City. It is seen being used by members of the Umbrella Security Service, Government Spec Ops, and even Leon S. Kennedy in early gameplay footage and screenshots. VECTOR, FOUR EYES, BERTHA, SHONA, HARLEY are shown with this weapon in the Triple Impact trailer.[1]

The Assault Rifle is available by default and does not need to be bought with XP. This weapon offers a decent firepower, good accuracy and is comfortable at mid-range. It features the lowest blood frenzy making enemies bleed rarely. Its rate of fire is rather comfortable though, but it is recommended to fire it in short bursts in long range combat. The weapon has magazine of 30 rounds, 120 spare rounds and maximum 150 spare rounds. This weapon will be used by AI-controlled Assault class allies.

Leon and his Assault Rifle

Beltway and an Assault Rifle 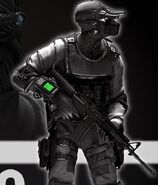 Spectre With an Assault Rifle (art)

An Assault Rifle shown in a trailer.