The Assault Rifle is a fully automatic weapon with good stopping power and rate of fire. Just like the Submachine Gun from Resident Evil 2, the rifle's ammunition is counted as percentage value, with each magazine worth 100%.

One full burst in MANUAL mode consumes 1% of the rifle's ammunition, so a full magazine at 100% should hold 300 bullets, more or less.

This fully automatic weapon is useful for a lot of combat situations, such as stopping running Zombies and battling the fast Hunters. Though being weaker than the Magnum, the Assault Rifle is still an excellent weapon for fighting Nemesis.

UBCS member Carlos is armed with the M4A1, which the player can use while playing as him. However, the weapon is only available for Jill in one of three ways:

Carlos Oliveira is equipped with the Assault Rifle as his primary weapon in Operation: Mad Jackal. 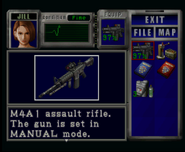 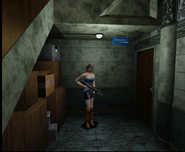 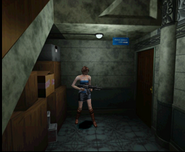 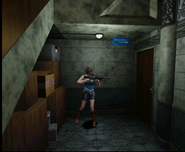 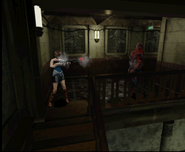 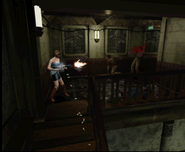 Jill firing in Auto Mode
Add a photo to this gallery

Retrieved from "https://residentevil.fandom.com/wiki/Assault_Rifle_(RE3)?oldid=807610"
Community content is available under CC-BY-SA unless otherwise noted.