The Assault Shotgun is a shotgun found in Resident Evil 6.

It can be found by Chris Redfield, Piers Nivans and Ada Wong. Chris and Piers can find this weapon in Chapter 2 in a room if the player decides to go back from where they were chased by the Ogroman. However, if the player misses it, the weapon can be obtained in the City Hall in a room where the J'avo burst out of. While in Ada's campaign, it can be found in Chapter 1 just before Ada's attempt to escape the submarine.

The Assault Shotgun is, obviously, most effective in close range, where the pellets do not have time to spread out. It deals less damage compared to its pump-action counterpart, and holds one less round. However, it is semi-automatic, which greatly increases its versatility in combat and makes it an effective counter to mid-level threats such as Bloodshots, Whoppers and Napads. When using this weapon, one should always watch their ammunition count. Although being slower than the Hydra, it still shows no mercy to the careless. Even though it is semi-automatic, the character pumps the weapon when reloading.

Taking aim at a zombie 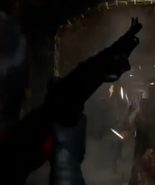 Weapon Description
Add a photo to this gallery

Retrieved from "https://residentevil.fandom.com/wiki/Assault_Shotgun_(RE6)?oldid=663352"
Community content is available under CC-BY-SA unless otherwise noted.