In Resident Evil 0, much of this room is dilapidated. The turntable itself is in poor condition and is corroded. The tunnel intended for trains to travel through has collapsed past several feet. Much of this damage is repaired by September, though the collapsed passage remains sealed.

Upon arriving in this area during scenario A as Leon/Claire, he/she will carry Ada Wong/Sherry Birkin into the B4F security room.

After exiting the security room, the player can follow the "MAIN SHAFT" sign on the wall to find the entry to the main shaft. There is also long corridor which leads to the A-2 elevator, but it cannot be access in this scenario.

In scenario A, the player will face five zombies upon returning here at some point.

In scenario B, the player can use the A-2 elevator to enter this area. Upon exiting the elevator, five zombies will be face here. Unlike scenario A, the security room will require the Master Key to unlocked. After the self-destruct system is activated in scenario B for Leon, the player must return here with the Master Key to unlocked the security room to fetch Sherry before heading to the B8F Platform.

The turntable breaks down after use, forcing the player to go upstairs via the large elevator. During the T-001 fight, a shutter will come down, locking Rebecca in a short tunnel. If the player returns to the room later they will be able to explore the rest of the room again.

This area is visited three times in the game.

Memory of a Lost City 6:

In chapter 6, the G-Virus file is found in this room by shooting the first light on the ceiling once the first 3 zombies appear, to the left of these 3 zombies there is also Shotgun ammo on the floor. There are a total of 10 zombies in this room, the 3 that spawn after T-00 appears cannot be killed.

Memory of a Lost City 7:

In chapter 7, the Laboratory Security Manual is found in this area. When exiting the A-2 Elevator, shoot the last light at the ceiling for this file. There are a total of 4 zombies in this room, all of them will be on the right side after exiting the elevator.

Memory of a Lost City 8:

In chapter 8, the William Birkin file is found in this same area by shooting the third light at the ceiling closest to the A-2 Elevator. There are 2 Plant 43 and 10 Evolved Lickers in the room this time, right next to the A-2 Elevator entrance there is also a Herb.

In both chapters, the area next to the train has many lights around it that can be shot at which will give the player points and gold.

B4F turntable room
Add a photo to this gallery

Door to the Main Shaft.

The A-2 Elevator.
Add a photo to this gallery

G-Virus file location in Memory of a Lost City 6 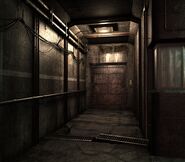 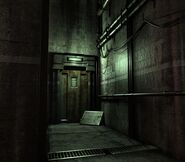 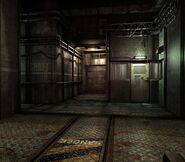 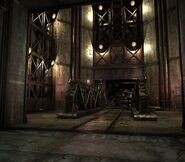 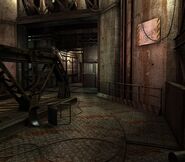 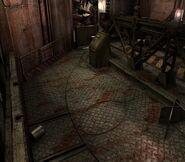 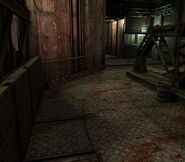 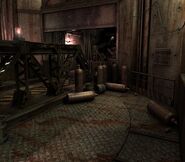 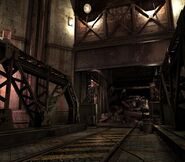 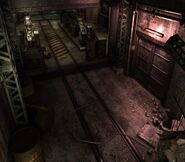 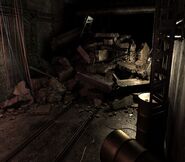 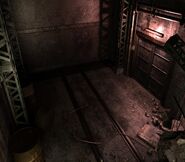 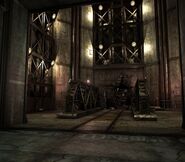 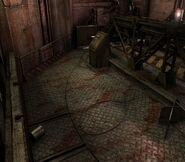 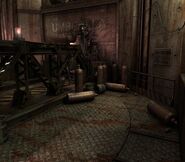 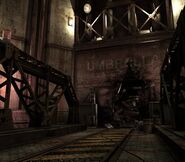 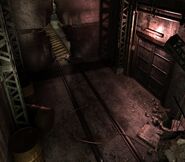 Retrieved from "https://residentevil.fandom.com/wiki/B4F_turntable_room?oldid=796076"
Community content is available under CC-BY-SA unless otherwise noted.