The BIOHAZARD 2 ORIGINAL SOUNDTRACK was composed by Masami Ueda; Shusaku Uchiyama and Shun Nishigaki for the video game Biohazard 2, known as Resident Evil 2 outside Japan. It does not contain every track written for the game however. The remaining tracks were included in the subsequent release of the BIOHAZARD 2 COMPLETE TRACK album on August 21, 1998. 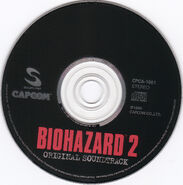 Booklet page 5 - 6
Add a photo to this gallery

Retrieved from "https://residentevil.fandom.com/wiki/BIOHAZARD_2_ORIGINAL_SOUNDTRACK?oldid=750383"
Community content is available under CC-BY-SA unless otherwise noted.