June 20, 2011
Biohazard Outbreak Survive (バイオハザード アウトブレイク サバイヴ, Baiohazādo autobureiku sabaivu?) is a mobile phone game released in Japan in 2011 for the GREE social networking service. Survive was free-to-play with purchasable upgrades. The game was up from 20 June 2011 until the server closure on 29 May 2015.[1] As of 23 May 2012 the game had exceeded 2 million users.[1]

The game was marketed as a "Social Survival Horror" title, introducing a typical social gaming aspect to the franchise. Players would complete a number of missions, and send health and other items to their friends to prop them up.

The game was first released for iOS and Android phones capable of using the iOS 4.3 and Android OS 2.1 firmware, respectively.[1] In December 2011, the game was also made available for DoCoMo, au and SoftBank phones.[1]

To commemorate the franchise's 15th Anniversary, additional cards were added to the game, including a special Jill card in police uniform (echoing an alternate costume in Resident Evil 3: Nemesis).[2] 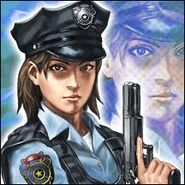 Retrieved from "https://residentevil.fandom.com/wiki/BIOHAZARD_Outbreak_Survive?oldid=866188"
Community content is available under CC-BY-SA unless otherwise noted.