The player must shoot to shove back zombies and other enemies coming from the top of the screen. After many shoots, the enemies die and a boss is fought: the first boss is a Tyrant, the second is a Yawn and the third are numerous crows.

After fighting the three bosses, the game loops with the enemies becoming faster and stronger until the player loses by letting one of the enemies reach the main character. The playable characters are Leon S. Kennedy and Claire Redfield. Leon has a more powerful gunfire than Claire, but Claire is faster than Leon.

Leon being approached by zombies

Leon fighting at a Tyrant
Add a photo to this gallery 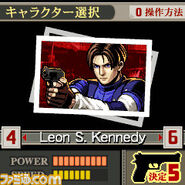 Claire being approached by zombies

Leon fighting at a Tyrant
Add a photo to this gallery

Retrieved from "https://residentevil.fandom.com/wiki/BIOHAZARD_ZombieBuster?oldid=853192"
Community content is available under CC-BY-SA unless otherwise noted.