View source
watch 01:16
Who is the Baker Family?
Do you like this video?
Play Sound

The Baker family is an antagonistic group in Resident Evil 7: Biohazard. They consist of the following:

Before the arrival of Eveline and their subsequent infection, the Baker family were mostly shown to be generally loving and caring for one another, even towards strangers in need. However, there did seem to be some slight dysfunction within the family, primarily concerning Lucas and his anti-social behaviour which possibly stemmed from some issues in his childhood. Additionally, it is unknown exactly why Joe chose to live a secluded lifestyle away from the rest of the Bakers.

After being infected and taken over by Eveline, most of the Baker family turned into highly sadistic killers whose nature became blatantly violent, deranged, and cannibalistic. Their movements were especially unpredictable towards survivors, most notably towards Clancy Jarvis and Ethan Winters. As a result of Eveline's control, Jack and Marguerite are unstable and have a strained relationship, often yelling at each other only to forgive one another, most noticeable in Bedroom. Their children, Zoe and Lucas, who are not under Eveline's control, are polar opposites of each other - Zoe is one of the few who was not turned insane and aids any survivors she can contact to escape and get the serum to eliminate the virus, ensuring to seclude herself from the rest of her mad kin; while Lucas plays with and tortures the captives, actively participating with the rest of the family's sadistic events and showing his psychopathic nature.

Eveline is the cause of all of the suffering and madness surrounding the Bakers and their land, twisted by her innate desire to have a family of her own and simply killing anyone who stands against her or does not fit her ideals. Jack, Marguerite and Lucas are all very protective of Eveline and will carry out all her demands, mainly kidnapping other people such as vagrants and hikers to add to the family and even catering to her rapidly aging state. However, it should be noted that the infected Jack cannot stand the thought of being replaced as Eveline's father figure after Ethan's arrival and her intention to make him into her new "daddy" alongside her "mommy" Mia, going so far as to try and prove himself by attempting to murder Ethan.

Mia Winters is considered by Eveline to be her "mommy" after she is assigned as her handler on an escort mission to South America, with Eveline infecting Mia in order to keep her under her own control. As Mia is very aware of Eveline's potential powers, she tries her best to contain the situation and ensure that the damage is minimised, but ultimately the infection gets the better of her and she becomes as sinister, bloodthirsty, and sadistic as the rest of the Bakers, also participating in some of the murders on the Baker property. However, it is clear that she has a deep love for her husband Ethan, as she struggles against Eveline's control when she is forced to attack him.

Joe Baker is largely unaffected by the events that occur over the three years that the rest of the Bakers are infected, having adopted an outback lifestyle secluded from the rest of society. However, he retains a loyal love for his family, as is shown when he fiercely protects a deteriorating Zoe from both the Molded and the Blue Umbrella forces sent to save her.

The Baker family in the Daughters DLC. 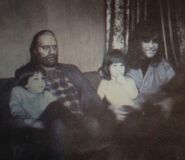 An older picture of the Baker family
Community content is available under CC-BY-SA unless otherwise noted.
Advertisement