Start a Wiki
watch 01:50
The Loop (Games)
Do you like this video?
Wildstorm universe
(Covers information from the D.C. comics)

Barry Burton was a S.T.A.R.S. officer caught up in Umbrella's affairs in 1998.

In response to the T-virus -related killings in the Arklay Mountains, S.T.A.R.S. HQ assigned Albert Wesker command over the Raccoon City branch. In a short period of time, Barry and a number of other S.T.A.R.S. members were transferred to the city. Wesker considered Barry to be ideal for manipulation, should it be necessary.[1]

During Wesker's gathering of new teammates, Barry and Jill Valentine were assigned the case of investigating the brutal murders at Raccoon City College, which had already claimed the lives of students Julie and Michelle Allen. Wesker gave Jill the assignment of going undercover as a university student on transfer from Grant University, while keeping in permanent radio contact with Barry should the murderer attack. During the night, Jill was hunted by a werewolf but succeeded in killing it with her Smith & Wesson before Barry could reach her. Seeing the creature displaying human traits, he concluded it to be a "naked weirdo" instead.[2]

In the lead-up to the Mansion Incident, Barry became aware that Wesker was an Umbrella informant and learnt of some of the Mansion's secrets. However, his knowledge of the T-virus was far off- rather than being a mutagen being developed for military use, he instead believed it to be a natural, though dangerous virus that escaped during vaccine research. While he intended to turn Wesker over to the authorities after the investigation, his commander made sure that would not happen by having Barry's family taken hostage to force him into working for Umbrella.[3]

After the investigation was concluded and the mansion destroyed, the four surviving S.T.A.R.S. members (Barry; Jill; Chris and Rebecca) recalled the events in a meeting. Barry brought up his knowledge of the Arklay team's research into the G-Virus, based on notes Wesker failed to have destroyed. His knowledge of the difference between "T" and "G" was that the former could not spread between individuals. He also brought up that William Birkin was leading the project, who he described as "fanatically-dedicated" and would "sacrifice anything to achieve his goals". At the conclusion of the meeting, Chris revealed that S.T.A.R.S. had been compromised by the company, and wanted to talk to him and Jill personally, with Rebecca and Barry undergoing transfers pending psychological evaluation.[3]

With the Raccoon S.T.A.R.S. branch effectively disbanded, Barry Burton accepted S.T.A.R.S. HQ's suggestion of seeking out psychiatric help in dealing with his nightmares. Visiting a building to see Dr. Peter W. Lengle, he saw a zombie shamble nearby, though passed it off as his imagination. Unfortunately, it turned out the building was being used by Umbrella for viral research and had experienced a biohazard upon his arrival. Dr. Lengle, who was aware of the research "subjects", was killed by a zombified laboratory researcher. Barry took the doctor's access key and began moving through the building in search of an escape route not compromised by fleeing employees being eaten.

With too many zombies on and near the ground floor, Barry decided it was better he take charge of the situation and have the building destroyed to protect the town. Moving into the basement, Barry planned the breaker on an electronic lock to prevent zombie movement through the likes of elevators and revolving doors. While underground, he heard from a dying Umbrella researcher that a bomb was set to go off in the event of a biohazard. Killing the man to end his suffering, Barry obtained a map showing the locations of the bomb parts. Collecting the parts, he was forced to overcome zombies; cockroaches and a Tyrant, suffering only a fractured leg. With the bomb parts acquired, Barry moved up to the penthouse to set it up. With a five-minute delay, Barry jumped out of a window and into a "strategically placed pool" while the building exploded.[4]

After his escape from the zombie infestation, Barry; Jill and Chris were dispatched by a "top-secret international agency" to search for Umbrella's laboratories in Europe, their first location to search being London. To maintain their cover, they were forced to travel on a commercial flight without S.T.A.R.S. identification and fires without causing attention. During flight preparations, an Umbrella agent infested the water supply with a "fast-acting" T-virus - the reason being that since the pilots received water first, they'd quickly become infected and crash the plane into the ocean.

The virus had already spread through Business Class before the completion of the in-flight tutorial, and survivors fled to Second Class. The three former-S.T.A.R.S. members took charge of the situation once again and fought off the zombies to protect the survivors behind them. Unfortunately, it was revealed during the fight that the pilot was infected and killed, and Barry and Jill covered Chris as he landed it in London. Leaving the plane, they met their agency contact, "Falcon".[5]

The three moved all along Europe in search of Umbrella's headquarters, fighting off biohazards at the Tower of London; Westminster Abbey; Madame Toussaud's Wax Museum; the Eiffel Tower; the Louvre; the De Gooyer Windmill and an Oktoberfest celebration in Munich. By the end of these, it had long since become apparent that Umbrella was predicting the three's movements and releasing their viruses in the hopes of killing them.

As they moved to Queck Castle in Fussen, Germany, the three split up to search the estate. During exploration, Barry played a musical instrument he found. The sound it made opened a secret library compartment, allowing access to the diary of a man named Abe, who searched for an antidote to cure his brother Kane of viral infection. Barry then left Abe's study, and was confronted by a zombie that was nothing but sinew and bones.[6]

Barry killed the skeleton and regrouped with Chris, who had escaped from living suits of armour. Searching for Jill, they confronted the mutated Kane, who was hunting down Jill and Abe. Barry force-fed the monster with a live grenade as Abe set off the castle's self-destruct system to kill everyone. The three escaped in time, jumping out of a castle window and into the forest below. There, they were met by Chris' sister, Claire and a man named Leon Kennedy, who were led to the castle by Falcon.[7] 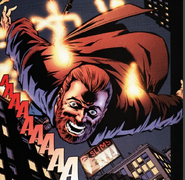 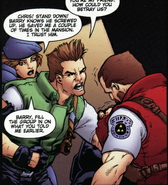 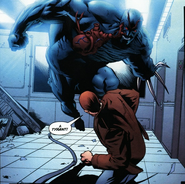 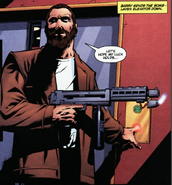 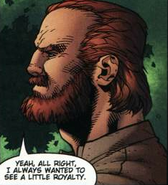 Retrieved from "https://residentevil.fandom.com/wiki/Barry_Burton_(WildStorm)?oldid=646180"
Community content is available under CC-BY-SA unless otherwise noted.