Bela Dimitrescu was a chimæric mutant human born from the Cadou research project, and an adopted daughter of Countess Alcina Dimitrescu. She resided at Castle Dimitrescu with the rest of her family, including fellow adopted siblings Daniela and Cassandra. She was the oldest daughter, noted to be quiet but with a strong head on her shoulders.[2] She was killed during a raid on the castle by Ethan Winters.

Bela Dimitrescu was born likely in the 1930s or 1940s, and it is possible she worked as a maid at Castle Dimitrescu. At some point in or prior to 1958, she became subject to an experiment with the Cadou parasite. All human cells in her body were consumed by imitation blowflies born out of the parasite, which then assimilated her DNA and turned into imitation human cells. None of the three successful test-subjects remembered their life pre-experiment, and were adopted into the Dimitrescu family as Countess Dimitrescu's daughters.[3] Like the others, Bela consumed human flesh for sustenance, and maids were sent into the basement for infractions and violently mutilated and drained of blood.[4] This practice continued well into 2021, when orders were given by Mother Miranda to prepare for an important ceremony. Any remaining servants were then killed.

On the morning of 9 February 2021, Ethan Winters wandered into Castle Dimitrescu looking for his daughter, Rose, who had been abducted for the ceremony. Of the household, it was Bela who captured him first, biting into him and then dragging him by his legs to the Countess. Though disappointed she was not given the right to consume the man by herself, the four hoped they would be able to eat him together once given permission by Miranda, and he was hoisted onto a chandelier.[5] While awaiting permission, Winters escaped captivity and was caught by Bela. Bela followed him through the underground and back up to the kitchen. During the scuffle, however, Winters fired his gun at a nearby window, exposing her to the cold air from the courtyard. With the cold forcing her body into hibernation, she became vulnerable to physical attacks and calcified, leaving behind her crystalized remains.

Like her other sisters, Bela's DNA consisted of human and blowfly genes, and she was capable of expressing these genes where needed, changing between a human form and a swarm of flies. This ability to change form allowed her to resist gunshot wounds and other physical attacks, as well as giving her the ability to stalk prey. The imitation DNA however made them susceptible to low temperatures which would force them to undergo cryobiosis, with temperatures under 10 °C (50 °F) halting metabolism. This was a known risk to their health as it left them vulnerable to attacks, and the sisters rarely if ever left the castle.

Bela appears only in the basement of the castle after Ethan falls down there trying to escape from Cassandra. She pursues him through the different chambers, inflicting persistent damage from swarm she is a part of when she gets too close. If she gets within range, she can lunge towards Ethan and bite at his neck. She cannot be harmed and must simply be fled from; however, dealing sufficient damage to her will make her dissipate, giving the player a few seconds of breathing room.

When Ethan fights against Bela just outside the Kitchen, her exposure to the cold severely weakens her strength. Unable to transform into her swarm form, she resorts to instead using her sickle weapon in a mad frenzy to kill Ethan, but is able to be hurt by Ethan's arsenal. On the Village of Shadows difficulty, a few Moroaică will spawn and assist Bela in her boss fight. 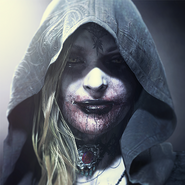 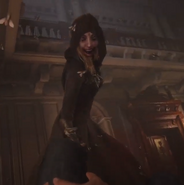 Bela inside the dungeon.

Ethan encounter Bela in the dungeon.

Ethan encounter Bela in the Kitchen