Samurai Edge (M92Fカスタムハンドガン, M92F kasutamu handogan?) is a series of customised Beretta 92Fs produced by Joseph Kendo on behalf of the Kendo Gun Shop in Raccoon City. The Samurai Edges were purpose-built for the Special Tactics and Rescue Service, and inspired later lines of modified Beretta 92s.

They first appeared in Resident Evil 3: Nemesis as they were not established as part of the lore in the original Resident Evil. The remake of the game later adjusted the story and gameplay to include them because of the retcon.

First commissioned in December 1996 as the "M92F S.T.A.R.S. Special",[1] the handguns were built at the request of the R.P.D. during the formation of the S.T.A.R.S. unit. After almost a year of experiments and trials, Police Chief Brian Irons approved the concept in Feburary of 1998. The prototypes were tested by select S.T.A.R.S. members, namely Chris Redfield, Jill Valentine, Barry Burton and Albert Wesker. After receiving a few further adjustments, Robert Kendo sent a fax to the S.T.A.R.S office notifying them that the models had been completed and that Joe had dubbed them as the "Samurai Edge".[2] He derived the name from how the wide, black angled slide and white rounded barrel resembles a katana.[3] They were first issued in June.

From 23 to 25 July 1998, in the events leading up to and during the Mansion Incident, S.T.A.R.S Bravo and Alpha brought their Samurai Edge weapons with them when they were dispatched respectively. None of the members who died on the mission had their weapons salvaged, with Chris presumably losing his on his way to the Spencer Mansion.

Later, on 27 September during the Raccoon City outbreak, Jill brought her Samurai Edge with her as she escaped the city.

After the destruction of Raccoon City, most of the Samurai Edges were presumably lost or destroyed. With the remaining S.T.A.R.S. team disbanded, these uniquely modified weapons would have no longer been utilized by any paramilitary group.

In 2009, during the Kijuju Autonomous Zone Incident, Wesker was seen still using his own variant. He had saved it so that he could kill his old comrade, Chris, who recognized the gun when aimed upon by it and gave Wesker an angry stare, remembering his treachery.[4] Wesker lost his Samurai Edge in the cargo bay of his bomber and it is presumed that he did not retrieve it before the bomber crashed into the volcano, so therefore it is assumed to be lost or destroyed.

Jill gave her variant for Quint to study which ended up utilizing an accessory rail from an M9A1 making the Samurai Edge A1 after she join the BSAA. Currently, her variant is unknown, however, in another account, she lost hers in the first encounter with Nemesis, destroyed in her apartment.

Barry kept his Samurai Edge. However, he needed a new model that would have less recoil on his wrists. So he sent a photo to Quint to make a new one which ended up with a bigger compensator and chambered in 9mm instead of .40 S&W.

The current location of Rebecca's Standard Model is unknown, as she still had it at the end of the mansion incident, but it's unknown if she took it with her when she left Raccoon City.

During the wake of the 2004 Abduction of the President's Daughter, Leon Kennedy requested Joe Kendo to make a customized handgun for him, in which Joe offered to build an entirely new gun from scratch. When Leon came to pick it up, Joe described the gun as "absolutely a new Samurai Edge" and Leon named it "Silver Ghost".[5]

Throughout 2012, while Red Umbrella were conducting experiments and testing equipment, they equipped some of their subjects with replicas of both the regular Samurai Edge and Wesker's variant.[note 1]

Before his death, Albert Wesker designed a new handgun, based on his original Samurai Edge's customizations and aesthetics, but modified to be an anti-BOW weapon, naming it the "Samurai Edge - AW Model-01". The design was further developed by Blue Umbrella and eventually used in 2017 during the Baker House Incident by Chris Redfield and briefly by Ethan Winters.

The Samurai Edge was built under a very strict set of requirements:

The final version of the Samurai Edge hosted a wide range of features not present on the standard 92F. The wraparound grip panels were enlarged and extended below the magazine foot, and consisted of wood with synthetic recoil-absorbing inserts on the side panels and backstrap. This grip design also required replacing the hammer spring cap (which normally would have a lanyard ring on the end). Further modifications include a heavier Brigadier slide (allowing it to withstand the use of higher pressure rounds), target sights, an extended slide catch, and a stainless steel barrel. Kendo also emblazoned each handgun with the S.T.A.R.S. logo, placed upon the left side of the slide below the ejection port and on a medallion in the center of each grip panel.

Members of S.T.A.R.S. added further customizations based on their personal preferences and their time in S.T.A.R.S.[6]

Chris' Samurai Edge had been upgraded with a blued finish slide and a stainless steel trigger with the dark blue S.T.A.R.S. medallion. In addition, minor internal modifications were done to make it a competition-ready weapon with a medium-weight slide and adjusted trigger pull.

Jill's Samurai Edge has a standard-sized slide stop lever and black slide with a S.T.A.R.S. medallion in light blue.

Barry Burton had a heavily customized version of the "Samurai Edge." It fired .40 S&W caliber bullets and featured a compensator for increased accuracy and stability and went with a red S.T.A.R.S. medallion. This Samurai Edge is not based on a 92F like the other versions of the weapon, but rather a 96FS.

Wesker's handgun is the most heavily modified Samurai Edge. Having designed most of the modifications himself, Wesker's Samurai Edge has the lower frame and takedown lever replaced with Inox (stainless steel) parts, in addition to a skeleton hammer and Brigadier sights with the S.T.A.R.S. logo on the grip being black. Interestingly, Wesker is seen using this design throughout both the remake and Resident Evil: The Umbrella Chronicles, with the exception to the opening cutscene to "The Mansion Incident" and during the player's first encounter with Sergei Vladimir. Wesker's handgun also features an integrated Vertec style accessory rail on the bottom of the frame, as well as a beavertail horn—a feature that was introduced on the 92 platform (during the

design stages of the 92 Combat), but never put into production.

The Samurai Edge manual also mentions that "a large removable silencer [which mutes sound sufficiently] can be mounted directly to the frame in a one-touch motion. The silencer type installs directly into the barrel, but accuracy doesn't worsen because a brake is not used on shorter recoil." Wesker used this feature in Dark Legacy (Silenced Handgun).

Rebecca Chambers' Samurai Edge was the Standard Model that was originally made for the S.T.A.R.S. Team. [note 2]

The Bravo Team S.T.A.R.S. members were all issued the Standard Model Samurai Edge. During Bravo team's search in the Raccoon City forest they all had weapon lights and/or lasers attached to the frames of their Samurai Edges.[7][8]

In many of the Resident Evil games, the Samurai Edge is a weapon that players can use.

In Resident Evil 5, Wesker sometimes uses it during his fight with Chris and Sheva on the takeoff platform.[note 3]

The only mention or use of the Samurai Edge in the Resident Evil films is in the most recent film, Resident Evil: The Final Chapter. In the final climax of the film, Wesker is seen using his iconic gun as he holds Claire Redfield hostage, and although it is only shown for a few seconds at a time it is used a lot in the final moments of the film and is handled by multiple characters such as Claire Redfield and Dr. Alexander Isaacs.

During the first trailer released for Resident Evil: The Darkside Chronicles, Claire and Leon can be seen wielding Samurai Edges.

Also, during Resident Evil: Umbrella Chronicles the Samurai Edges used by Chris, Jill, Rebecca, Wesker and Richard are incorrectly modeled as standard 92FS handguns with Samurai Edge textures. This is incorrect, as the Samurai Edge should feature the heavier Brigadier slide. The slides also feature forward serrations in this game, as well as a slight hump where the brigadier's hump is located, only not as pronounced.

During the E3 demo of Resident Evil: Operation Raccoon City, Leon is seen holding a Samurai Edge, However, he uses a Desert Eagle in the final version of the game.

When Albert Wesker was initially announced as a bonus character in Lost Planet 2, his Samurai Edge was also announced as a weapon to go with him. However, the gun was eventually removed from the final game. The Revolvers from the same game appear to be based on Barry's model.

Rendering of Wesker's Samurai Edge from the RE5 Strategy Guide

Wesker's special abilities give him the upperhand.

Barry's custom Samurai Edge is back in The Mercenaries 3D

Rebecca with her Samurai Edge

"A custom handgun that has been fitted with a scope for greater accuracy. These modifications should make it easier to hit a target's weak point."

Wesker with his Samurai Edge.

Samurai Edge in Marvel vs. Capcom 3. 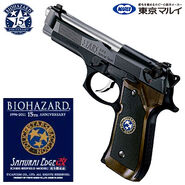 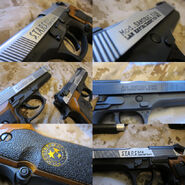