Billy was a mercenary who was employed by the Umbrella Biohazard Countermeasure Service, an anti-B.O.W. organisation led by Umbrella HQ.

On Tuesday 15 September,[1] the U.B.C.S. was mobilised to handle an viral outbreak in Raccoon City, which had been spreading for some time. By the time the U.B.C.S. arrived however, on Saturday 26 September, the water supply had already been contaminated and thousands of citizens had become Zombies. Billy was in a squad led by Arnold, and survived the bloody first night.

Nothing is known of the squad until Friday 1 October, when they received orders to prevent a rogue U.S.S. Captain from escaping the city with a stolen experimental B.O.W. Billy likely assisted in the laying of a mine field while Arnold oversaw developments from their camp on a highway overpass. When word got out that the US military was ready to destroy the city with an experimental thermobaric weapon, Arnold and his whole squad decided to simply abandon the city on the highway.

Billy is a Kevin-type character, possessing an average vitality of 2000-2500 points and an attack power comparable to Mark Wilkins. Billy is a fast runner, but is balanced by a 1.48% per minute infection rate. He starts every scenario with a Recovery Pill in his inventory.

Billy cannot be played normally in the game, and must be accessed through modding or cheating tools such as a GameShark. 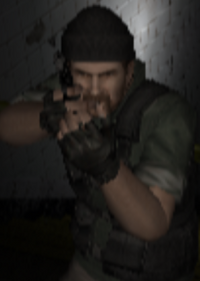