Bindi Bergara[note 1] was the Marhawa School's student council president.[2] She was one of those involved in the ensuing C-Virus outbreak that happened within the school.

Bindi took an interest in Nanan Yoshihara, a third-year student who was ostracized in the academy for her poor family background. Although her first attempts to reach out to Nanan was unsuccessful, she persisted until Nanan finally accepted her gestures of friendship. From then on, Bindi would do her best to support Nanan against her bullies, even after it became clear that Nanan was perfectly capable of handling herself if needed. A few months before the Marhawa School Incident, Nanan got into a fight with several students (led by Student Council Vice President Alisa); although she eventually won, she suffered serious injury. When she came to Bindi's room for treatment, the stunned Student Council President decided to report Alisa's actions to Mother Gracia's office; however, Gracia only covered up the incident in an effort to maintain the academy's reputation.

Dissatisfied with Gracia's decision, Bindi and Nanan decided to run away from Marhawa School and alert the police about the corrupt atmosphere. Unfortunately, Gracia caught up with the duo, bringing several security guards with her. Bindi was quickly subdued, but Nanan fought on until she accidentally slipped and fell off a cliff. Fuelled by fear for her friend, Bindi broke free of her captors and rushed down to Nanan, but she was far too late; Nanan had died instantly when she hit her head on a boulder at the bottom of the cliff.

Devastated at the death of her best friend, Bindi was approached by a mysterious woman who offered her a means of avenging Nanan's unjust demise: two samples of a powerful new virus. Aware that she was helpless to act against Gracia as she was, Bindi accepted the help and began scheming on how to expose Marhawa School's crimes to the world.

Sometime after the failed escape attempt, Bindi secretly visited the morgue and injected Nanan's corpse with a sample of C-Virus; this caused Nanan to mutate into a Lepotica that Bindi was able to command.  Using Nanan's ability to produce and release viral gas, Bindi infected a few students during a school festival, hoping to force Mother Gracia's hand by causing a small outbreak in the academy. To her dismay, Gracia once again covered up the potentially dangerous incident by locking the infected students in a building that was promptly burned to the ground; furthermore, she also accused Bindi of faking the attack (ironically unaware of her student's genuine culpability in the outbreak).

This setback proved to be the final straw for Bindi; instead of exposing the academy's crimes and corruption, she decided to destroy it entirely. To do so, she ordered Nanan to infect everyone with the C-Virus, causing chaos in the academy. Pretending to be unaware of the ensuing events, Bindi put on a facade of being visibly shocked and scared by the zombie outbreak as she joined up with a group of other survivors, killing the infected with a crossbow while secretly keeping an eye on Nanan when she could. At one point, she directed Nanan to infect Alisa when she discovered the latter en route to seduce Ricky Tozawa.

Despite her act of innocence, Bindi's true nature was suspected by Chris Redfield, Piers Nivans and Merah Biji, a group of BSAA agents sent to investigate and contain the outbreak. Realizing that her cover was blown, she admitted to perpetrating the chaos out of vengeance for Nanan's treatment and eventual death...as well as revealing that she had also used a second sample of C-Virus on herself. Mutating into a monstrous form with a massive, malformed left arm, she proceeded to rampage through the academy, slaughtering everyone in her path before confronting Mother Gracia. Expressing her hatred for the woman who had ruined Nanan's life for the school's reputation, she shrugged off Gracia's last-ditch attempt to shoot her (growing several extra eyes in the process) and mortally wounded her. She stayed in the same classroom even as Ricky and Nguyen Thi Quan arrived, with Ricky there to witness Gracia's last words. Bindi mocked her headmaster's last statement, stating that even in her dying breath, she was still trying to control everything.

Despite disposing of the main source of her troubles, Bindi continued roaming the academy grounds, looking for more survivors to kill. After causing Nguyen Thi Quan's death and mocking Ricky for his failure to save anyone, she faced Merah Biji in the school's cathedral, applauding the BSAA for her determination in the face of certain death. However, contrary to both Bindi and Chris's expectations, Merah proved more than a match for the infected Student Council President, riddling her body with gunfire and slicing off her mutated arm with a combat knife.

Unable to withstand Merah's assault, Bindi unleashed the full power of the C-Virus within her. She transformed herself into a Chrysalid before emerging as a massive, spider-like abomination. Piers Nivans finally intervened, ramming the BSAA humvee into her. Noticing that she was still moving, Piers detonated the explosives within the humvee and sniped her head with his 50 caliber. Although Piers and Merah left her for dead, the truth was she was far from it. Shortly after, the mysterious woman came upon her inert body. She taunted Bindi, which caused Bindi to once more fill with anger and spring into action. As Bindi pursued her enemies, she came across the remains of Nanan, who had been cut in half by Chris. Enraged by her friend's "second" death, she redoubled her pursuit after placing Nanan's upper half on her back. Eventually, Bindi caught up to the last group of survivors - Ricky and the three BSAA agents - as they were trying to escape the academy by helicopter. Despite fighting fiercely, she was eventually overcome, dropping Nanan's remains beside her as she collapsed for good. Unbeknownst to Bindi, Nanan was still alive at this time; when she awoke to find her mutated friend's corpse beside her, she made one final attempt of her own against the BSAA group, fatally wounding Merah before being killed in turn by Piers. Before dying, Nanan had an apparent vision of Bindi as an angel, thanking her for doing what needed to be done and promising that they would be "together...forever" in the afterlife.

Despite her demise, Bindi accomplished her goal of revenge against Mother Gracia and justice for Nanan. In the wake of the outbreak, the dark history and long-standing corruption of Marhawa School was finally brought to light, leading to the institution's permanent closure.

Unbeknownst to anyone, Bindi had been an unwitting pawn for the hooded woman who had given her the C-Virus in the first place; having observed the incident from the shadows, she now had ample data with which to refine her viral creation in preparation for future plans. 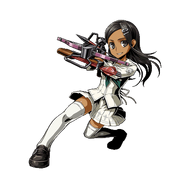 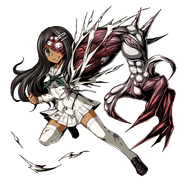 Bindi with her crossbow 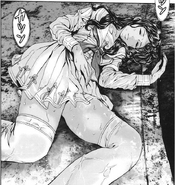 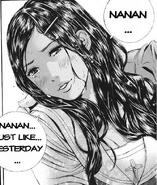 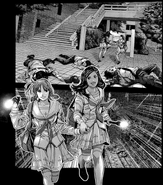 In the past, Bindi & Nanan try to flee the school 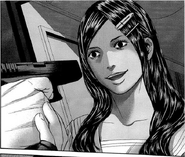 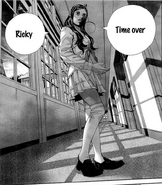 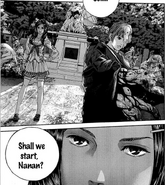 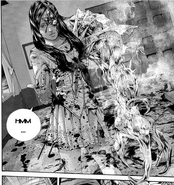 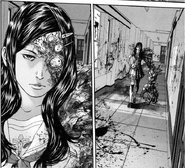