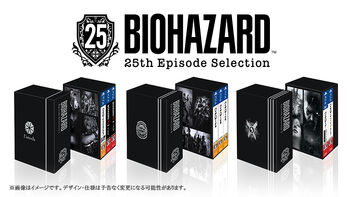 Biohazard 25th Episode Selection is a physical bundle released as part of the series' 25th Anniversary campaign. It is essentially a box set of all the numbered titles.

It was released November 25th, 2021 only in Japan. The set is divided into three separate volumes each with their own box.