"200X" (Planned)
"Castle" (tentative) is a nickname for the early version of Resident Evil 4 which existed from 2001 to 2002. Work began by Production Studio 4 after Executive Producer Shinji Mikami convinced Team Little Devil to re-title their own Resident Evil 4 prototype, which became Devil May Cry. The game went through an overhaul after TGS 2002, and was succeeded by the "Hallucination" version. Other nicknames for this game used by the media include "Fog", "Mist" and "Airship".

The game's main plot was to revolve around Leon S. Kennedy, who was conscripted into the US Army following his experiences in Resident Evil 2. Now a soldier within the elite Anti-Umbrella Pursuit and Investigation Team (part of USSTRATCOM), he participates in a raid on the castle of Dr. Oswell E. Spencer, Earl Spencer, where Umbrella HQ is located. The operation goes awry when the squad encounter Black Fog, a B.O.W. sent by H.C.F. as part of their own attack. The sole survivor, Leon is infected with a retrovirus and must resist his body's mutation. During his exploration of the castle, Leon runs into a young woman who was subject to experimentation in their lab and is protected by a B.O.W. dog companion. Leon's investigation uncovers the remains of an ancient underground civilisation below the castle where Progenitor Virus was isolated within the body of its superhuman king, revealing Umbrella Pharmaceuticals' existence was as a tool for Lord Spencer to achieve immortality.

In keeping with Hideki Kamiya's suggestions for the "Stylish" BIOHAZARD 4, "Castle" uses 3D settings rather than the pre-rendered backgrounds used in older games.

Development began in 2001 following an internal shake-up in Production Studio 4. An earlier Resident Evil 4 project directed by Hideki Kamiya was retitled Devil May Cry after Executive Producer Shinji Mikami pushed for it to be removed from the franchise. While that game was devised as a re-introduction of the franchise for a new console generation, Mikami felt it strayed too far from the formula both in story and mechanics.

The new game, later dubbed "Castle", used the same research material as the previous "Stylish" version, which included numerous photographs of Spanish, English and Welsh castles. Flagship was contracted to work on the story, led by Noboru Sugimura,[1] in partnership with Yasuhisa Kawamura, who he had worked with on an earlier cancelled Resident Evil title. Having written the script for "Stylish", Sugimura provided a similar story for Shibata but more in keeping with previous games. Ideas like Spencer or the protagonist being superhumans was not copied over, though the setting of Spencer's castle and the revelation on Progenitor Virus' contribution to human societal evolution were kept. The character of Tony Redgrave, a superhuman clone of Spencer akin to Alexia Ashford, was replaced with Leon S. Kennedy who, though lacking superhuman powers, was in the process of mutating.

As was typical until the late 2000s, Production Studio 4 developed "Castle" for a single console, with the intent of hiring other companies to port the game later. Under Mikami's instructions, the game was developed for the GameCube, with the game's assets and mechanics being tested on the Resident Evil remake, which used the same engine. Following the announcement of the remake, Mikami would come out in support of the console, and declared his intention to make all future Resident Evil games only for the GameCube. As such a policy was beyond his station, he would be made to clarify it only regarded the numbered games made by his studio. In spite of this, Capcom entered talks with Nintendo to support the GameCube with timed exclusives in what was dubbed the "Capcom 5" agreement.

As work progressed with "Castle", the programming team ran into difficulties. The Black Fog enemy, intended as something of a star attraction, was a very ambitious creation on their part. A floating mass of tentacles, it proved too taxing for the GameCube, which had trouble rendering it. To resolve this, Kawamura devised an alternative arrangement of enemies which would be hallucinatory in nature, the side-effects of Leon's mutations. Though this would require a revised story and changes in the mechanics, Shibata and Kawamura began work on the next phase in the game's development, "Hallucination". The script written by Sugimura, meanwhile, was donated to Production Studio 1, where Kazuhiro Tsuchiya was directing a horror game which would become Haunting Ground.

A theatre was at one point considered to be in the castle. 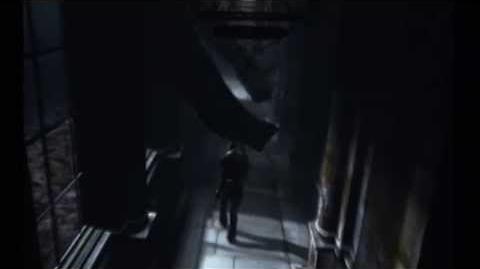