Start a Wiki
watch 01:50
The Loop (Games)
Do you like this video?
Real World article
(Written from a Production point of view)

It replaces the Resident Evil 2 demo included in the American release. The North American version was released as part of Sony's Greatest Hits line, but did not feature the bonus disc. However, several unused textures imply that an English released was planned at some point.

This disc allows the user to download save data for all versions of Biohazard and Biohazard 2 into their memory card and view footage from the prototype version of Biohazard 2 (BIOHAZARD 1.5). 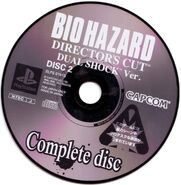 Disc Shot - This is how the bonus disc looks like.

Unused Save Screen BG 2
Add a photo to this gallery

Retrieved from "https://residentevil.fandom.com/wiki/Biohazard_Complete_Disc?oldid=716783"
Community content is available under CC-BY-SA unless otherwise noted.