Experimental B.O.W.
The Black Widow was a Bio Organic Weapon (B.O.W.) produced by Umbrella as part of their development program into Arachnid-based weaponry. 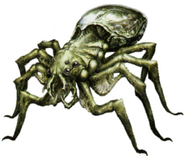