Start a Wiki
watch 01:51
The Loop (Games)
Do you like this video?
The Blue Herb was a plant native to the Arklay Mountains in the American Midwest.[1] It was capable of producing a compound that could be used to treat small to moderate doses of several venoms and poisons. However, the venom of creatures such as the Yawn and Nosferatu were far too powerful and required their own special medicines.

The herb was grown in and around Raccoon City and was also grown around the world by Umbrella.[2] 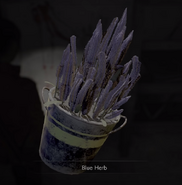 Blue herb (Gaiden)
Add a photo to this gallery

Retrieved from "https://residentevil.fandom.com/wiki/Blue_Herb?oldid=712893"
Community content is available under CC-BY-SA unless otherwise noted.