View source
watch 01:09
What is Blue Umbrella?
Do you like this video?
Play Sound
Prime universe
(Capcom's primary storyline)

The Umbrella Corporation is an American private military company founded in 2007. It was formed out of the American division of the Umbrella Corporation, an international pharmaceutical company that went bankrupt in 2003.[1] To differentiate it from its predecessor, its logo was given a blue hue and nicknamed "Blue Umbrella", separating it from the red-hued "Red" Umbrella.

From the 1970s to the 1990s, Umbrella Pharmaceuticals and Umbrella U.S.A. in particular, and the Umbrella Corporation in general aided the United States government in providing bioweapons research contrary to the 1972 Bioweapons Convention. In September 1998, a viral weapon, a modified ε strain, leaked into Raccoon City's drinking supply and mutated tens of thousands into creatures dubbed "Zombies". To both halt the spread and cover-up the research, the President ordered an experimental thermobaric weapon to be fired into the heart of the city on the morning of 1 October. With the existence of bio-weaponry kept a secret, the US government formed a policy of shifting all blame for the 100,000 deaths onto Umbrella. Umbrella was banned from conducting business within the United States, and a class-action lawsuit on behalf of the victims' families went underway. This case, dubbed the "Raccoon Trials", finally ended in 2003 with Umbrella being found criminally liable, and international orders for the arrest of executives were made.[2] Umbrella Pharmaceuticals declared bankruptcy, with its subsidiaries following suit over the year. While some may have been acquired by other companies, the controversial nature meant that in the case of Umbrella Japan, no buyer could be found, and it was instead liquidated in March 2004.[3]

Following the 2004 Terragrigia Panic, knowledge of Bio Organic Weapons became public knowledge, and the threat of bioterrorist groups acquiring such weaponry intensified. To ready itself for a new stage in the ongoing War on Terror, Chapter 11 Reorganization was invoked on Umbrella U.S.A.'s assets in 2007, and the company began doing business once more under a new executive consisting of former employees trusted by the US government.[2]

In its revived form, Umbrella U.S.A. changed the logo to blue to indicate its separation from its predecessor -red- to the public but the company still kept it original name to make it clear to the public that they are cleaning up the mess started by the original Umbrella Corporation as atonement.[2] Tasked with assisting in the War on Terror using the Umbrella Archives obtained by the government in 2003, Blue Umbrella began studying effective means of tackling B.O.W.s. Forbidden by the UN to re-activate the Umbrella Security Service, combat duties were to be handed to internationally recognized anti-B.O.W. organizations such as the BSAA. In operations where Blue Umbrella was involved, BSAA operators were to be armed with Blue Umbrella's anti-B.O.W. weapons and had access to combat data on the "Umbrella Arsenal System". While this server was intended to be top-secret, hacking methods by unknown persons led to public leaks.[4]

Despite the positive track records, a lot of people, especially Chris Redfield still distrusts them.  They nonetheless continued with providing important data. During the 2014 A-Virus outbreak in the Great Lakes, Blue Umbrella accumulated a library of CCTV footage of cannibalistic homicides caused by the Zombie mutants. This footage was useful in the international investigation, and Chicago's Alexander Institute of Biotechnology correctly hypothesized the randomness of the killings was caused by contaminated bottled water.[5]

The Baker House Incident was an outbreak of a Mold-based bioweapon engineered by The Connections, which consumed the ranch belonging to the Baker family in Louisiana. Lasting from October 2014-July 2017, the human B.O.W. prototype "Eveline" infected a number of people measuring from the dozens to hundreds and was able to manipulate infected people into aiding in the abduction and murder of others. Blue Umbrella became aware of the outbreak by July 2017, and understood that one of the family members, Lucas Baker, was free from Eveline's control and was aiding The Connections in Mold research.

Blue Umbrella coordinated a BSAA assault on the Baker ranch and quickly gained control of the farmhouses, rescuing civilians Ethan and Mia Winters in the process. A second team was killed by Lucas in the former Abercrombie Salt Mine; BSAA Captain Chris Redfield was successful in killing a mutated Lucas. When it was discovered, the Mold had spread into the local wildlife, a large wall was constructed in the bayou around the house as an exclusion zone, and Blue Umbrella units were sent out beyond the wall to ensure no mutants escaped containment while efforts were underway to create a cure for the infection. Several weeks after their initial arrival, Jack Baker made an attack on Blue Umbrella's bases, killing BSAA operators and lab workers alike, and forced his way back to the ranch's Main House with his daughter, Zoe. BSAA reinforcements led by Captain Redfield found he had already been killed by Jack's brother Joe Baker.

Although not being directly related to the Village incident in February 2021, the Umbrella Corporation supplied the Hound Wolf Squad with equipment such as the Med Injector. 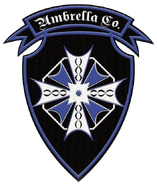 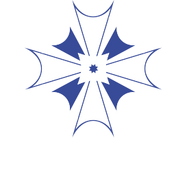 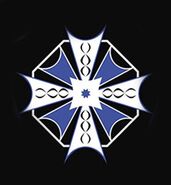 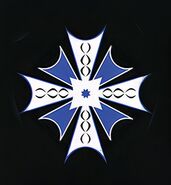 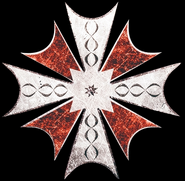