Resident Evil 4
The Broken Butterfly (マグナム, magunamu?) is the first Magnum to appear in Resident Evil 4. The gun appears as a powerful top-break revolver. It is one of the few weapons that can be found instead of purchased.

The Broken Butterfly takes up 8 spaces (4x2) of inventory and uses rare Magnum Ammo. It can be bought from the Merchant for 38,000₧ first available in Chapter 3–1. However, one can be obtained for free in the Western castle wall in the castle. Leon will need Ashley's help to retrieve it.

The Broken Butterfly has a starting firepower of 13.0, but further upgrades will strengthen it. The fully upgraded Magnum is 25 times as strong as a fully upgraded Handgun, but its ammunition is quite scarce and almost never dropped by enemies.

The Broken Butterfly's exclusive upgrade increases its firepower to 50.0. This makes it the third most powerful weapon per shot in the game, after the Handcannon and the Rocket Launcher.

The free Magnum when picked up 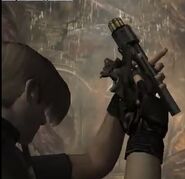 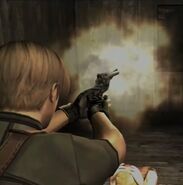 Leon with the Broken Butterfly
Add a photo to this gallery
Retrieved from "https://residentevil.fandom.com/wiki/Broken_Butterfly?oldid=804710"
Community content is available under CC-BY-SA unless otherwise noted.