A Zombie is a human being who has mutated following exposure to certain strains of C-Virus via inhalation.[1] They were first independently identified during the 2011 Marhawa Desire incident, and went on to appear during the 2013 attacks in Tall Oaks and Tatchi. Following the demise of Neo Umbrella, Umbrella Co. continued to study some Zombies which were discovered in the ruins of the Antarctic Base.

Zombies have mutated to be considerably resilient, able to survive injuries that would be fatal in a normal human. Like t-Virus Zombies, these Zombies also suffer from necrosis of the epidermis and brain tissue resulting in brain damage, as well as hyper-production of hormones relating to anger and hunger. Rotting and discolouration of the skin occurs soon after infection, causing it to look grey and dying and in some cases even showing what looks like bruising or skin damage. The mutation also causes alterations in the eyes, which most commonly leads to the irises turning yellow or pale green, often with a bright red colouring around the outer edges of the iris .Like the t-Virus Zombies, these Zombies also produce a great deal of stomach acid that can be highly dangerous when making contact with a living creature. Not only are they able to produce this acid, but they are also able to spit it across great distances.[2]

Zombies seriously wounded may also undergo the V-ACT process, whereby they begin a new set of mutations, resulting in Bloodshots, analogous to the Crimson Heads and Lickers created through the Epsilon strain.

What sets them apart from t-Virus Zombies are four things. Firstly, C-Virus Zombies do not suffer the same degree of mental deterioration that their counterparts do, and are more likely to be seen using blunt weapons. This is a trait likely relating to genes derived from the t-Veronica Virus. Secondly, the C-Virus is known to be capable of reviving mummified corpses, as the Golgotha Virus was capable of doing. Thirdly, these Zombies are known to be more manoeuvrable than their counterparts, being known to pounce on prey, and though t-Virus Zombies are known to sprint to a limited degree these mutants do so much more often.[3] Fourthly, while the C-Virus can be inhaled as an airborne pathogen easily, it is not contagious in fluid exposure. As consequence, a Zombie bite will not spread the virus further. This trait was spotted during the Marhawa Desire after Ricky Tozawa was bitten.

This type of zombie appears to be more aggressive than ones previously encountered, snarling and roaring at potential food. Although they will move toward their target slowly, once they get into range they will immediately pounce onto whatever is nearby viciously. Greater mobility than their predecessors gives them the capability to be greater hunters, as they are seen bypassing obstacles that would have stopped t-Virus zombies, such as climbing fences.[4] C-Virus Zombies have the tendency of utilizing weapons and are seen wielding pipes, swords, and axes at times. At one point, a zombie is seen lashing out with its hands after being pushed away, seemingly attempting to scratch the target.[5] They also have the ability to spit acid at the player from a distance. Scratching and vomiting are two traits they share with their t-Virus counterparts.

The zombies found in Resident Evil 6 come in a large variety, such as civilians, police, firefighters, BSAA agents, soldiers, and even old corpses found in the Tall Oaks cemetery and underground catacombs. Zombies suffer easily from body damage, making them easy to dispatch with headshots. Although shooting their legs or knees can cause them to fall and lose mobility, they will still be able to dive or crawl towards a target and drag them down. A number of the zombies carry various weapons that they can use. Although their usage of them is rather rudimentary, they should still be considered very dangerous. Under certain circumstances (such as counterattacks or when stunned if the zombie has the weapon embedded in their body), this weapon can be turned against them.

Significant variations of the standard zombie exist. The conditions are unknown, whether they are evolutions, different degrees of exposure to the virus, infection method, or having to do with the infected themselves. 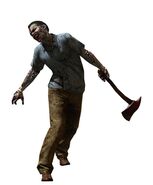 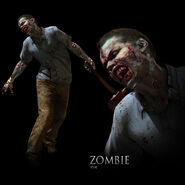 Shrieker
Add a photo to this gallery

Retrieved from "https://residentevil.fandom.com/wiki/C-Virus_Zombie?oldid=872793"
Community content is available under CC-BY-SA unless otherwise noted.