The C. Hand Gun (カスタムハンドガン, kasutamu-handogan?) is a weapon in Resident Evil 2. The gun is identified as a Heckler & Koch VP70.

The C. Hand Gun holds eighteen bullets. A single burst can knock down a zombie, useful in close quarter fights with them. This handgun automatically reloads when all bullets are fired. The Burst Handgun can also be set to either Semi-Auto Mode or 3-Shot Burst Mode in the menu. C. Hand Gun can effectively take on tougher opponents such as lickers with ease when using the Burst Mode, but with the disadvantage of a much heavier ammunition usage.

In Extreme Battle, there is a 50% chance that the C. Hand Gun can be created in Leon's game, as H. Gun Parts can appear inside the Sleeping room in Lab B4F. This can happen in all three levels. 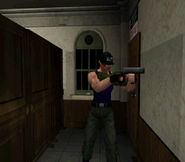 Japanese item description
Add a photo to this gallery

Retrieved from "https://residentevil.fandom.com/wiki/C._Hand_Gun?oldid=662891"
Community content is available under CC-BY-SA unless otherwise noted.