The CAPCOM Dev1 Thank You Campaign (CAPCOM Dev1 一万人ありがとうキャンペーン?) was a Twitter campaign meant to celebrate the fact that @dev1_official reached 10,000 followers on Twitter.

The campaign lasted between January 11 - February 10, 2019. During this period, anyone who followed @dev1_official and retweet the pinned campaign tweet had the chance to earn one of the 20 exclusive Devil May Cry 5 X Resident Evil 2 Special T-shirts. 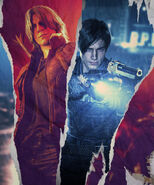 T-Shirt preview
Add a photo to this gallery

Retrieved from "https://residentevil.fandom.com/wiki/CAPCOM_Dev1_Thank_You_Campaign?oldid=693627"
Community content is available under CC-BY-SA unless otherwise noted.