Carla Radames injecting herself with an enhanced strain of C-Virus

The Carla Spores were bizarre manifestations of Carla Radames (and therefore Ada Wong) after she had infected herself with the enhanced strain of C-Virus. Appearing similar to the "real" Carla shortly after infection, they represented Carla's growing mental instability.[1] These Spores were used by Carla to confront Ada Wong in a more personal manner, as opposed to using her increasingly-dehumanized body.[2]

If Ada gets too close, the smaller spores will attack with a spray that can cause knockback, while the larger spores will lunge at Ada, and even at one point try to consume her.

The larger spores are invincible save nitrogen gas attacks, and the smaller spores are easily some of the most resilient creatures in the game—the player can expend their entire stock of ammo on one spore and it still won't die. There is almost no point in defeating them, as they can be easily avoided and are not worth the trouble.

However, if the player is set on killing them, or in dire need of ammunition (the spores usually do not drop skill points), the player must concentrate attacks on each extremity, first the head, then each arm, and finally the legs to open the remains of the spore up for a melee, which will usually kill them. Crossbow shots will usually take out the arms and head in one or two hits each depending on the difficulty.

There are three types of Carla Spore, each more deadly than the last. They are typed as Carla Spore S, M, and L respectively.

The smallest type of Carla Spore and the only type that can be destroyed with conventional firearms, though it takes quite a while. They appear as gooey versions of Carla just post-infection, and do not attack directly. Instead, they periodically grow boils full of acidic blood on their bodies, which burst when an opponent gets too near or when they are shot. They are incredibly resilient to damage and will continue to attack even when reduced to a head and lower torso. The best way to get rid of them is to weaken them with fire to the arms, head and upper torso, then get the resulting walking legs to kneel to open them up for a melee attack. They will either drop 50 to 100 skill points (the norm for humanoid enemies) or, more usually, a box of ammunition. It is worth noting that Carla Spore S manifestations cannot be permanently destroyed. They simply melt into the white goo that constitutes them and are absorbed back into Carla's body.

It is also worth noting that there are even smaller variants of Carla Spore which appear as three red eyes on a nodule. These are destroyed in a single hit and drop ammo or skill points. However, being too close to them can result in damage, as the eyes are filled with acidic blood.

The Carla Spore M is a bizarre manifestation that appears as Carla's body rapidly takes over the aircraft carrier. It shows up in two forms: either a mass of arms growing out of the wall or a smiling Carla face with twitching eyes. The arms are little more than a nuisance and will slow Ada down, but when coupled with a Face Spore they become exceedingly dangerous, as they will hold Ada in place while the Face Spore devours her. The face is both disturbing and dangerous, as when it is approached it will quickly split into a three-lobed maw and chomp at the nearest threat. This can be prevented with constant gunfire, which will make it flinch, but it cannot be destroyed.

The strongest and most disturbing spore type, the Carla Spore L seems to be a direct manifestation of Carla herself, created to confront Ada personally. It appears as a warped face plastered over an open doorway with two thankfully useless hands by either side. It cannot be destroyed by conventional gunfire, this will only cause temporary damage that will quickly heal. It attacks by creating S-Type Carla Spores and by over-inflating its eyes with blood, which burst and spray acid in a wide radius. In this form Carla is nigh invincible, but the thinness of her body proves to be her downfall when Ada blows a hole in her face and destroys the liquid nitrogen store behind her, breaking the L-Type Spore apart and freezing the rest of her body, ending Carla's insanity. 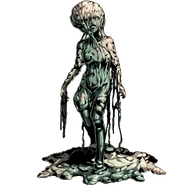 Carla Spore in Clan Master.
Add a photo to this gallery
Retrieved from "https://residentevil.fandom.com/wiki/Carla_Spore?oldid=791591"
Community content is available under CC-BY-SA unless otherwise noted.