Cassandra Dimitrescu was a chimæric mutant human born from the Cadou research project, and an adopted daughter of Countess Alcina Dimitrescu. She resided at Castle Dimitrescu with the rest of her family, including fellow adopted siblings Bela and Daniela. Cassandra was the middle child and she was noted to be a sadist who particularly enjoyed tormenting and killing her victims.[2] She was killed during a raid on the castle by Ethan Winters.

Cassandra Dimitrescu was born likely in the 1930s or 1940s, and it is possible she worked as a maid at Castle Dimitrescu. At some point in or prior to 1958, she became subject to an experiment with the Cadou parasite. All human cells in her body were consumed by imitation blowflies born out of the parasite, which then assimilated her DNA and turned into imitation human cells. None of the three successful test-subjects remembered their life pre-experiment, and were adopted into the Dimitrescu family as Countess Dimitrescu's daughters.[3] Like the others, Cassandra consumed human flesh for sustenance, and maids were sent into the basement for infractions and violently mutilated and drained of blood.[4] This practice continued well into 2021, when orders were given by Mother Miranda to prepare for an important ceremony. Any remaining servants were then killed.

On the morning of 9 February 2021, Ethan Winters wandered into Castle Dimitrescu looking for his daughter, Rose, who had been abducted for the ceremony. Cassandra and her sisters captured him and presented him to the Countess, who refused to let them eat him until given permission by Mother Miranda.[5] While awaiting permission, Winters escaped captivity and was chased on the second floor before escaping down a hole. Cassandra ambushed him again in the Armory room. Cassandra sealed him inside and intent on killing him regardless, commenting that she was worried her other sisters will get to him first. However, Winters was able to blow open the wall using explosives and weaken Cassandra with the cold air, similar to how he had dealt with Bela earlier. The ensuing fight was one she lost and calcified, with only her crystalized remains all that was left of. Cassandra's dying moments were of utter shock, unable to comprehend how her prey could have defeat her.

Like her other sisters, Cassandra's DNA consisted of human and blowfly genes, and she was capable of expressing these genes where needed, changing between a human form and a swarm of flies. This ability to change form allowed her to resist gunshot wounds and other physical attacks, as well as giving her the ability to stalk prey. The imitation DNA however made them susceptible to low temperatures which would force them to undergo cryobiosis, with temperatures under 10 °C (50 °F) halting metabolism. This was a known risk to their health as it left them vulnerable to attacks, and the sisters rarely if ever left the castle.

Cassandra appears in multiple areas of the castle, occasionally spawning during exploration to catch Ethan off guard. She pursues him through the different chambers, inflicting persistent damage from swarm she is a part of when she gets too close. If she gets within range, she can lunge towards Ethan and bite at his neck. She cannot be harmed and must be escaped from, though she can phase through doors using the swarm and will only be slowed down by them. Moving far enough away from her will eventually cause Cassandra to drop the chase.

When Ethan fights against Cassandra in the Armory, her exposure to the cold severely weakens her strength. Unable to transform into the swarm, she resorts to instead using her sickle weapon in a mad frenzy to kill Ethan, but is able to be hurt by Ethan's arsenal like any other enemy.

In some sections of the game, Ethan can overhear Alcina calling for Cassandra where she instructs her daughter to bring her Ethan's head in retribution for killing her sisters. When Cassandra has been defeated, Alcina can be overheard calling for her but receive no answer, prompting her to fly into a rage at incurring an "impossible debt". 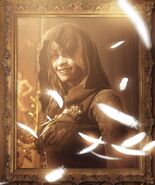 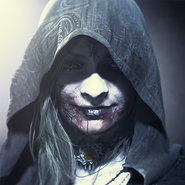 Cassandra inside the Main Hall of the castle.

Cassandra being vulnerable to firearms.

Cassandra being expose to cold air.

Cassandra about to attack Ethan.

Cassandra effected by the cold 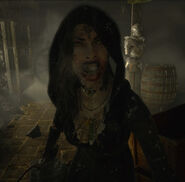