The furnace (溶鉱炉, Yōkōro?)[1] is an area underneath the castle.

There is a lever which opens the furnace, but will close after a few minutes. Here that Leon S. Kennedy fought two Gigante, before proceed to the Pit.

Leon can instantly kill one of the Gigante by climbing the scaffolding and taking the zip line across; as one of the Gigantes approach Leon, pull the lever to open the floor and instantly kill it in the lava. In all versions other than the GameCube version, this prevents it from dropping any Pesetas (in the GameCube version, leaving the room and returning will spawn the money on top of the hatch it fell into). One should be keep their distance from the lava pit until the hatch closes again, as it is possible that the Gigante will quickly grab Leon and pull him into the lava, causing instant death. The lever can only be used to kill one Gigante, so the remaining giant must be killed in a more traditional fight.

Note that one of the El Gigantes is protected partially by metallic armor, so the player should aim at its flesh and be sure not to waste ammo.

Using the Ditman glitch, it is possible to skip this fight in its entirety by using the zip line twice in quick succession, which will cause Leon to clip through the wall; from here, the player can walk straight to the exit door. 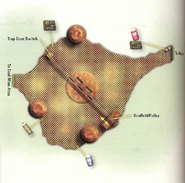 Retrieved from "https://residentevil.fandom.com/wiki/Castle/Furnace?oldid=678764"
Community content is available under CC-BY-SA unless otherwise noted.