The garden (庭園?)[1] is an area of the castle. It consists almost entirely of a Topiary Maze.

This area is only explored to its fullest on the normal mode or higher. It is filled with Colmillos, which hunt in groups at various areas of the maze. A group of three and a lone Colmillo can be found in locked kennels, which will burst open after Leon passes them. In addition to this, most items picked up in the maze will spawn a wave of the dogs.

The player requires two halves of the "Blue Moonstone" in order to open a gate and leave the area. These are located on the two fountains found within the maze: one across a bridge that leads over the maze and another atop the fountain in the very center, raised off the ground.

This area is also playable in the "Separate Ways" scenario but, unlike Leon, Ada Wong has to fight zealots here. Ada starts out at the fountain on the ground floor next to the Merchant, who will now sell her the Bowgun. The door to exit is locked until a certain number of Zealots are killed, then a Red Cultist will spawn with a few henchmen and open the gate. 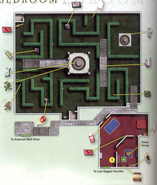 The maze as seen from the balcony.

The castle as seen from the maze.

Colmillos in a cage

"You used the Blue Moonstone."

Retrieved from "https://residentevil.fandom.com/wiki/Castle/Garden?oldid=640636"
Community content is available under CC-BY-SA unless otherwise noted.