The western castle wall (西側城壁?)[1] is the western side of the castle, overlooking the valley.

It features a water fountain with crows perched on it and a locked room along the wall.

Once Leon has access to the previously mention locked room he will have an easier time traversing this section of the castle, as well as access to a few items in the room. Be wary, there is a snake in one of the boxes.

The door near the fountain is locked and the room behind it can only be accessed with the Piggyback command after Ashley Graham is saved. Inside multiple items can be found inside chests, including a free Broken Butterfly.

In Separate Ways, Ada must come here to obtain the Hourglass w/ Gold Decor, which in her scenario is considered a key item. The area can be accessed from either entrance point, as Ada can choose to go either here or to the Castle/Dining hall after escaping the Garden. The area is populated with crossbow Zealots as well as some red-cloaked Zealots.

The hourglass is located behind the locked door, where Ada must Hook Shot over the wall. Be aware there is a masked, red-robed cultist in the room waiting for her. Inside the large chest is where the hourglass resides, which after obtaining allows Ada to leave. 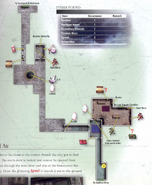 "With a little help from another person, i might just be able to get in from up there,"

Retrieved from "https://residentevil.fandom.com/wiki/Castle/Western_castle_wall?oldid=656310"
Community content is available under CC-BY-SA unless otherwise noted.