The Chainsaw Controller is a special controller for Resident Evil 4.

The Chainsaw Controller are the manufactured hardware by Nuby Tech, capitalizing on the popularity of Capcom's GameCube survival horror Resident Evil 4, a game dripping with adult themes, violence and gore. The peripheral is excessively niche. A character from Capcom's title often referred to by fans as the "Chainsaw Man" inspires it. The grotesque enemy, who wears a burlap sac on his head and run at the game protagonist Leon S. Kennedy with a deadly, buzzing chainsaw is one of the more menacing foes in the game capable of sawing off his prey's head before players know what hit them. Nuby Tech's controller is designed to look very much like the figure's chainsaw, right down to the blood splatters on the handle.

The chainsaw peripheral comes packed in one artistic and stylized boxes. The box looks exactly like a set of three-paned, double windows from one of the dark and dreary cabins so commonplace in the villages of Capcom title. Clearly viewable through the windows is the chainsaw controller, which actually protrudes from one side of the box, revealing a saw blade splotched in fake red blood. The backside of the package shows a gruesome drawing of the Chainsaw Man cutting off Kennedy's head. However, the device's plastic blade serves no control purpose which does not move though it resembles its in-game counterpart.

Based on extensive play tests, Nuby Tech's claims that its chainsaw controller actually improves the Resident Evil 4 experiences are false. The device features all of the standard sticks and buttons of a regular GameCube controller, but lacks of an intuitive configuration.

The two analog sticks, D-PAD,A, B, Y, X and START buttons are mapped to the face of the chainsaw controller. Meanwhile, the L and R buttons are assigned cumbersomely to each handle and the Z button is hidden away underneath the peripheral's face groove. 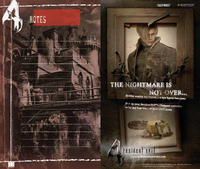 Retrieved from "https://residentevil.fandom.com/wiki/Chainsaw_Controller?oldid=827215"
Community content is available under CC-BY-SA unless otherwise noted.