500hp
The Chainsaw Sisters (チェーンソー姉妹, chēnsō-shimai?) are a class of Chainsaw Ganado.

They wielded red chainsaws and wore bandages completely covering their heads. Like the Chainsaw man, they are slower than the player.

One of the sisters confronted Ada Wong on her search for a way into the Church. A second sister confronted her near the caves on the other side of the valley. Two other sisters joined together in a camp where they attacked Leon S. Kennedy. However, Leon managed to kill them both.

The Chainsaw Sisters are much like the Chainsaw Men having very high health, flinch resistance, and an attack that can instantly kill the player. However, the Chainsaw Sisters swing their chainsaws much faster than the men, making them even more dangerous. There is a secondary death animation that only occurs while playing as Ada and the player is killed while walking backwards or is up against a wall.

The player can obtain a Bottlecap modeled after the Chainsaw Sisters as a rare prize from game B. Their bottlecap name is displayed as "Bella Sisters" in English and their sound effect is the one played when they attempt to attack the player. One scream is played after the other making it sound like both are attacking.

They appear in the mini-game The Mercenaries in the first stage. They spawn in sets of two and player must kill both of them to receive 5,000 points.

Two of them spawn every 10 kills for up to 3 times (6 in total). It is advised to dispatch them before new ones spawn, because the initial two will usually be more than enough. They usually spawn by either of the gates, behind the barn with the ladder, or outside by the bedroom window. They will sometimes drop First Aid Sprays upon being defeated. They seem to have a very high vitality compared to most other Mercenaries bosses as they can take several Shots from Wesker's Killer 7 without dying.

Two of the sisters are featured in a bottlecap

A close-up on one of the sisters' faces 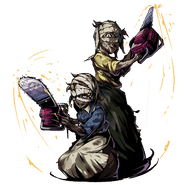 Chainsaw Sisters in Clan Master.
Add a photo to this gallery

Retrieved from "https://residentevil.fandom.com/wiki/Chainsaw_Sisters?oldid=823728"
Community content is available under CC-BY-SA unless otherwise noted.