Meet up with the informant

Chapter 1-1 is the opening chapter to Resident Evil 5. It is set in Kijuju, a coastal city in West Africa. The main enemies of this level are the "Town Majini", with the Executioner Majini being an optional though hard to avoid boss.

The Bioterrorism Security Assessment Alliance has launched a major operation in Kijuju to apprehend Ricardo Irving, an American oil field director suspected of profiting in the black market sale of Bio Organic Weapons. The operation is currently split into several teams with their own roles: Alpha Team under Cpt. Dan DeChant will lead a Squad into the warehouse believed to be the next site of a black market deal. In the event Irving tries to escape, Bravo Team (Chris Redfield and his partner Sheva Alomar) will cut him off. Support will be provided by Charlie Team in the form of BSAA pilot Kirk Mathison.

Redfield arrives in the city outskirts south of the river out of uniform to better blend into the area, and walks with Alomar to a butcher's shop where their informant, Reynard Fisher is based. Fisher directs them to the next area, and warns them about mumblings of the Uroboros Project, a rumoured doomsday project which may in fact be real.

En route to the warehouse, Redfield and Alomar are cornered by local Kijujuans, who have fallen pray to a mutant Plaga parasite spread around the city by Irving's customers, and are known as "Majini". Finding themselves at an execution site, they witness Fisher himself being beheaded by the Executioner, a Majini mutated to great size and strength. The Majini leader, the Instigator, spots the two BSAA agents and the audience attacks. Mathison flies overhead and fires a rocket at a massive metal door preventing their escape from the mob.

Kirk Mathison (via radio): "This is Kirk. Chris, Sheva: Can you read me?"

Kirk Mathison (via radio): "There's a black market weapons deal going down in Kijuju. That's where Irving will be. Alpha Team has already infiltrated the area and you'll be going in as backup. Rendezvous with your contact at the butcher's shop. You can gear up and get briefed on the mission there. Watch your backs!"

Sheva Alomar: "Copy. Over and out."


Walking into the Corner Pyamya front, rather than the side-entrance

Reynard Fisher: "Ah, Chris Redfield. Go around to the side door."


Walking into the shop

The level begins at the south end of the Civilian Checkpoint. There are no items in this room, enemies to kill or files to read. The player's objective is simply to go up the road, take a left, and continue on to the end. Civilians (implied to Majini) will carry a variety of weapons and stare at the player, but will otherwise not attack. Further, there will be a group beating a man trapped in a bag, who will stop to stare. At the butcher's shop, the player will be prompted to enter via the side door if they look through the shop front.

Following the second cutscene, the new objective is to leave out the back door. Down a flight of steps is a dead dog on the corner of the path. While the player can simply continue on this path, going into the nearby building will reward them with two Green Herbs. Continue down the path and through the door at the end.

This area starts within a Kijujuan man's home. In the cutscene he is implanted with a Plaga and becomes a Majini, making him a target to be killed. In the next room are five Handgun bullets that will replenish the player's arsenal following the fight. As there is no accessible door, the player must then press the appropriate action button to jump out of the window into the alley below.

Outside, a cutscene will trigger and a large group of Majini will spawn. They are clustered, in large numbers and do not drop items, so farming is not possible. Players re-doing the level can however earn a Topaz (Marquise), valued at ₦3,000, after killing thirty Majini and then a final dynamite-wielding Majini. Unless to collect this prize, the player is strongly advised to simply run further along the path and up the stairs to the next area, collecting a Hand Grenade and Red Herb just against the door before entering.

Following another cutscene, Chris and Sheva are now both trapped inside a building. Using an action prompt, both must work together to destroy a door keeping the player and partner from exploring the rest of the building. This room is full of giant Axes. A further x10 Handgun rounds can be collected nearby. Following this, the player must leave by dropping down a shaft into an underground tunnel. At the top of a ladder at the end they can recover another Green Herb and x20 Handgun rounds split into two decks. 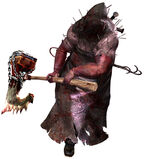 The Public Assembly is an expansive area, but at the start most of it is sealed off behind a metal gate. The player must fend off a mob of Majini storming the building, even coming in from the ceiling after a while. Eventually, the Executioner Majini will appear and destroy the gate, allowing escape into the rest of the Assembly.  This area closest to the gate consists of a crashed bus to shelter in, but which only has one entrance/exit and a two buildings which can be climbed but which Majini will follow. Debris between the bus and buildings can be set on fire by shooting the petrol cans, which can cause injury to the Executioner and kill the Town Majini, with other petrol cans being dotted around the map. If the Executioner is killed, he will drop a Gold Ring worth N5,000. If the petrol cans have all been destroyed, there are also transformers which will send out massive surges of electricity when shot at. Beyond the crashed bus is a small building where the Vz.61 machinegun can be found in a suit-case. Behind this building, the player can go up to a walkway for hanging, which will give good sight of the Town Majini. Another walkway closer to the building at the start will lead to the building's roof and upper levels, where Hand Grenades can be collected. Town Majini will still attack at this height, though be in lower numbers. This entire fight takes place with an unseen countdown timer, which ends up with Kirk Mathison destroying a second metal gate with a rocket launcher, ending the level. Therefore, if the player wishes to defeat the Executioner they must face a countdown.

Retrieved from "https://residentevil.fandom.com/wiki/Chapter_1-1_(Resident_Evil_5)?oldid=855808"
Community content is available under CC-BY-SA unless otherwise noted.