The Chemical Flamethrower is a weapon that appears in the Resident Evil 2 remake.

The Chemical Flamethrower can be obtained by players either in Leon's campaign by solving the associated queen/ king plug puzzle in the sewers or within Katherine Warren's Runaway scenario in the The Ghost Survivors mode. It takes up 2 inventory slots and has a max capacity of 400; with one trigger pull expending 2 units of ammo by default. An upgrade part for it called the Regulator is present at the Nap Room inside the Laboratory, which allows for a much better fuel efficiency and less frequent reload overall.

While not especially powerful against most common enemies; stronger enemies such as G-Adult, Birkin's G mutations, and Super Tyrant fall incredibly fast to it. It is also Leon's only weapon capable of finishing the Ivy enemies for good. 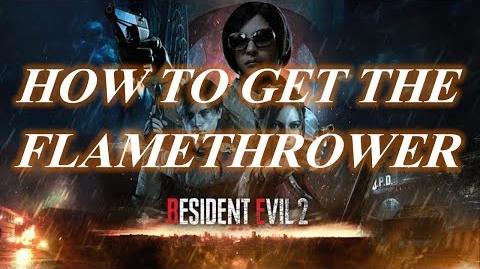 Resident Evil 2 Remake Guides How to get the Flamethrower Queen and King plug
Add a photo to this gallery
Retrieved from "https://residentevil.fandom.com/wiki/Chemical_Flamethrower?oldid=823112"
Community content is available under CC-BY-SA unless otherwise noted.