Start a Wiki
watch 02:17
The Loop (Games)
Do you like this video?
Anderson universe
(Covers information from Anderson's universe)

Chris Redfield is a survivor of the Global T-Virus pandemic and worked for a military unit for a while before the outbreak. He reunites with his sister Claire Redfield, who was said to be searching for him.

During the height of the Global T-Virus pandemic, Chris fought alongside a unit of soldiers from the United States Army, which were deployed to guard the Citadel Correctional Facility in Los Angeles. The military intended to use the prison as a stronghold and a base of operations. They intended to evacuate the prisoners, but as the situation at the prison began to deteriorate, the military released the prisoners to aid them in the fight against the growing numbers of Undead.

When the prison was deemed expendable, the military was ordered to pull out. In the confusion of their evacuation, Chris was jumped by prisoners and left to rot in a cell somewhere near cell block-B. At an unknown point in time, six Los Angeles survivors (Luther West, Bennett, Angel Ortiz, Crystal Waters, Wendell and Kim Yong) found their way into the abandoned prison and created a safe haven for themselves.

When they discovered Chris, he was dressed in prison garbs, and their immediate reaction was mistrust. They left him locked up in the cell and kept a rotating watch on him. Privy to the structure of the prison, Chris attempts to convince them that he knows a way out of the prison as things get worse, but Luther intends to keep him imprisoned until the arrival of Alice and his sister Claire.

After Alice releases him, he is reunited with his amnesiac sister who doesn't remember him. With Alice's help, he devises a plan of escape, leading her and Crystal down underneath the flooded levels of the prison below to stock up on defensive weapons and firearms located in the armory. During the escape, survivors are picked off by Undead and a mutated Undead.

In the end, only he, Claire and Alice are left. When they reach Arcadia, he fights side-by-side with Claire and Alice against Albert Wesker. Both Chris and Claire are easily defeated by Wesker and trapped in stasis pods. Chris is desperate to reach his sister as the pods descend underneath the floor of the throne room.

Finally, Wesker is defeated by Alice with the help of K-Mart, and Alice releases Chris and Claire. Wesker is not dead despite Alice blowing out the top of his head with a shotgun. Claire and Chris unload their pistols into him and seal him inside the throne room with Bennett (one of the survivors from the Citadel prison). Bennett haggles to be released over the intercom and irritates Chris so much that he shoots out the intercom to silence him.

Wesker escapes, but his helicopter is destroyed with a bomb planted on-board by Alice. Chris witnesses Alice broadcasting a message of hope for survivors across the globe as a massive Umbrella force led by Jill Valentine converges on the ship.

When Alice reaches the last human settlement in the ruins of Raccoon City, she finds Claire who had managed to escape Umbrella captivity on the way to the Hive. However, what happened to Chris is not revealed.

Chris, peering out of his cell

Chris and his sister, Claire

Chris along with Claire get capture in a Umbrella holding tanks.

Chris and Luther shooting at the Undead. 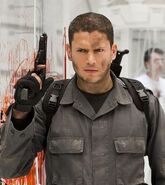 Chris and Claire, as they shoot Wesker.

Claire, Chris and Alice looks at the explosion.

Chris continues watching the explosion as Claire smiles with Alice.

Alice, K-Mart, Claire and Chris
Add a photo to this gallery

Retrieved from "https://residentevil.fandom.com/wiki/Chris_Redfield_(Anderson)?oldid=807642"
Community content is available under CC-BY-SA unless otherwise noted.