When a modified Epsilon strain of t-Virus contaminated Raccoon City's water supply, tens of thousands mutated into Zombies by the following evening. He was among the civilians in the vicinity of Jack's Bar and the Apple Inn, who were rounded up by police officers Arthur, Raymond and Dorian, with the intention of taking them to Raccoon Police Station for safety. The van was stopped minutes later by roadblocks, and Chuck was told to continue on foot, which enraged him, believing the police had effectively abandoned him, but did not want to leave the area. The van was able to continue its trip when police reinforcements arrived in the area, but it is uncertain if Chuck was an occupant of the van during this second leg.

Chuck's character skin can only be accessed through cheat devices such as GameShark. He's a Jim-type character and starts with a Red/Green herb mixture in his inventory.

Chuck's stats are as follows: 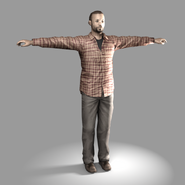 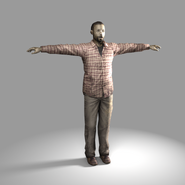 Zombie Chuck
Add a photo to this gallery

Retrieved from "https://residentevil.fandom.com/wiki/Chuck?oldid=811354"
Community content is available under CC-BY-SA unless otherwise noted.